You won’t have to Google her to find out Kim Zolciak is pregnant. Zolciak, the star of Real Housewives of Atlanta, has announced she is expecting. 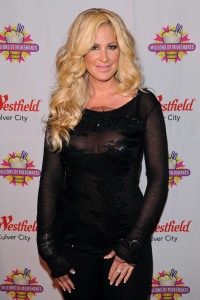 Real Housewives of Atlanta star and Tardy for the Party hit-maker Kim Zolciak is pregnant.

No, the Georgia baby peach isn’t the love child of her once soul mate Big Papa. Kim Zolciak and her boyfriend, Atlanta Falcons defensive end Kroy Biermann, are getting a reality check in unplanned blessings.

“I was surprised!” Kim Zolciak revealed to Life & Style. “While it wasn’t planned, God clearly has a bigger and better plan for us and we’re excited.”

The newest little Zolciak will be Kim’s third child, joining daughters, Brielle, 13, and Ariana, 9, from a previous marriage.

The Google Me singer is three months into her pregnancy and already there’s been talk of the “m” word — marriage. But don’t worry, no one will be tardy for a Kim Zolciak and Kroy Biermann wedding. The Real Housewives of Atlanta star has no plans on accessorizing a wedding dress with her baby bump. “I definitely don’t want to get married while I’m pregnant. But I can see myself marrying Kroy in the future,” she assured fans.

Kim Zolciak has been riding the fame of her club-friendly songs Tardy for the Party and Google Me, which originally caused feuding between her and Real Housewives of Atlanta cast mate NeNe Leakes. The two seem to have made amends during this season and put it all behind them.

Are you a fan of Kim Zolciak’s Tardy for the Party and Google Me? Are you excited to see if her pregnancy is followed by Bravo? Tell us, we want to know.

43 mins ago
by Kay Snowden