Tony Parker has filed his own divorce papers against Eva Longoria in Texas, days after Longoria filed her own in California. 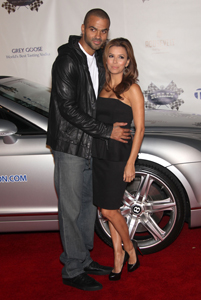 Less than a week after forcing a retraction from TMZ about filing divorce papers in Texas, Tony Parker has done exactly that. The redundant action came just days after Eva Longoria filed for divorce from Parker in California.

What’s up with the double filing? Divorces in Texas take far less time than divorces in California. Judging from the juicy gossip revealed in the past week about Tony sexting with the wife of a team mate, he is sure to want the whole mess over as quickly as possible.

Tony’s court docs state, “Petitioner believes Petitioner and Respondent will enter into an agreement for the division of their estate.”

“The marriage has become insupportable because of discord or conflict of personalities between Petitioner and Respondent that destroys the legitimate ends of the marriage relationships and prevents any reasonable expectation of reconciliation.”

He also stated that he has property separate from the community-marital property. In her divorce filing, Longoria states the couple has a prenup but asks for alimony.