Lindsay Lohan has been fired from Inferno, the Linda Lovelace biopic that was supposed to revive Lohan’s flatlining career. 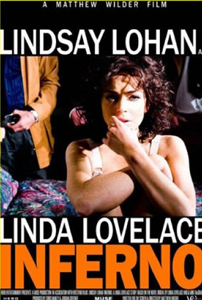 “We are withdrawing our offer from Lindsay Lohan,” Wilder said. “We are currently in negotiations [with another actress] and working out the legalities of bringing her onboard.”

This is quite an about-face from Wilder, who previously said he was committed to working with Lohan and would wait out whatever jail sentence or required rehab was mandated by the courts. So what happened?

“We have stuck by Lindsay very patiently for a long time with a lot of love and support,” Wilder says. “Ultimately, the impossibility of insuring her — and some other issues — have made it impossible for us to go forward.”

Of course, Lindsay’s people say she wasn’t fired, and that the actress is “concentrating on her recovery.”

A source hinted at some creative differences between Lindsay and Wilder. “She wanted them to tone down a lot of the racy scenes,” the source said. “It wasn’t going to be good for her to play someone with substance issues when she is going through her own recovery.”

Wilder denied that Lindsay quit but declined to comment further to avoid “mudslinging.”

Who will replace Lindsay Lohan in Inferno? Stay tuned to SheKnows for updates as they happen!