In Love and Other Drugs, Brokeback Mountain co-stars Anne Hathaway and Jake Gyllenhaal reunite (and have way more sex) in Edward Zwick’s romantic comedy-satire about a charming Viagra salesman (Gyllenhaal) who falls for a wild free spirit (Hathaway).

Love and Other Drugs is based on the non-fiction book, Hard Sell: The Evolution of a Viagra Salesman, written by Jamie Reidy. Gyllenhaal plays Jamie Randall, a man whose infallible charm earns him big pharmaceutical commissions and the affections of any woman he wants, that is, until he meets Maggie (Anne Hathaway) and finds himself falling head over heels in spite, or perhaps because of, her need to keep him at arm’s length. 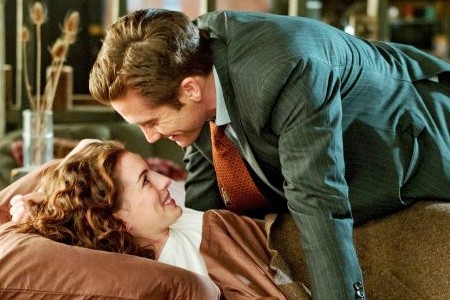 With a supporting cast that includes the omnipresent sidekick, Judy Greer, plus Gabriel Macht, Oliver Platt and Hank Azaria, Love and Other Drugs also features the last onscreen appearance of Jill Clayburgh, who passed away earlier this month after a two-decade long battle with chronic leukemia.

We have to admit after watching the commercials which played constantly during the most recent episode of America’s Next Top Model (go, Ann!), are we the only ones who suspect Hathaway ends up dying of a terminal disease by the end of the flick?

She’s got that “I’m living my life to the fullest because I’m on a ticking clock” vibe going. We’re guessing that means loving and losing Hathaway changes Gyllenhaal forever and he has to question his devotion to the corporate monster he’s a part of — one that can’t save his darling love.

Love and Other Drugs is very Love Story meets Up in the Air.

Love and Other Drugs trailer