The Twilight Saga: Breaking Dawn stars Robert Pattinson and Kristen Stewart were spotted stripped down to their bathing suits on set while filming the waterfall scene. 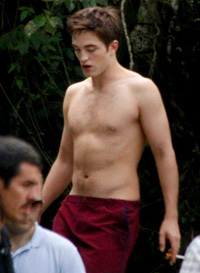 The Breaking Dawn set is steaming up! Cameras caught Robert Pattinson and Kristen Stewart (aka Edward and Bella) filming the honeymoon scenes in Brazil.

Pattinson is seen wearing a pair of red swim trunks, worn low on his hips, and carrying a cigarette. Stewart wears a sexy white bikini.

They were filmed frolicking under the Brazilian waterfall, and Pattinson was even spotted giving Stewart a piggyback ride!

Sources from inside the set say that Stewart, 20, and Pattinson, 24, are very much the couple and open when cameras aren’t around.

“They are much more open about being a couple,” an insider told Us Weekly. “You can’t not love them. They are the cutest.” 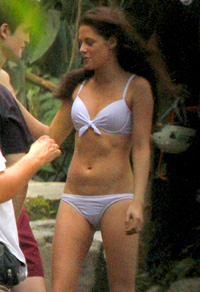 Will art imitate life for Pattinson and Stewart? Sources are saying that, like Edward and Bella, the couple may also be getting married soon.

“I wouldn’t be surprised if they got married in the next year.”