Glee hit another first with its boyishly charming version of Teenage Dream. The Glee version of the Katy Perry smash found itself ruling the digital track sales.

Fox’s Glee is steamrolling the charts, popping up at every avenue to claim a victory. Glee’s version of Perry’s Teenage Dream, sung by Blaine (Darren Criss), debuted at the top of the digital track chart to a sweet tune of 214,000 copies sold in the first week. The announcement made by Fox and Columbia Records also marks the first instance a Glee song reached number one. 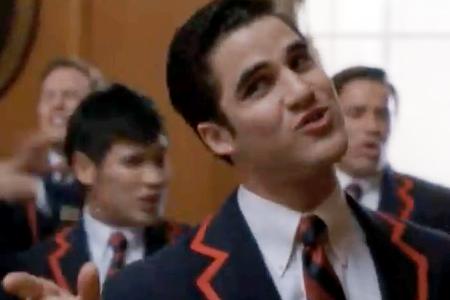 Teenage Dream catapulted Glee in front of James Brown for second place in most entries on the Billboard Hot 100. It seems like just last month we were reporting similar news, only last time Glee toppled the Beatles to take the number three spot. Who are they trying to dethrone now? The King Elvis Presley, that’s who.

With 17 million digital downloads and 6.5 million albums sold worldwide, Glee: The Music, Volume 1 is certified platinum and with volumes 2 and 3 cranking out 500,000 units, it may not be a matter of if but when they take the number one spot!

It was just announced Glee would take on Michael Jackson’s Thriller for its post-Super Bowl episode. Taking on the King of Pop could very well add to the chart-topping success of the cast of Glee.

For all you Gleeks keeping track, Glee: The Music, Volume 4 drops November 30. Keep the music alive!

What songs would you like to see featured on future episodes of Glee? Tune up your voices and sound off. We want to know.