Kate Middleton’s blue Issa London dress, which she wore to announce her engagement to Prince William, sold out within 24 hours of her appearance. 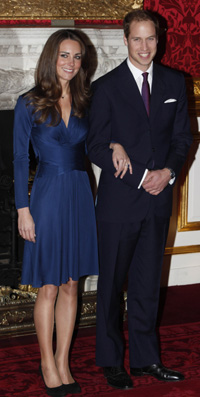 The sapphire blue Issa London silk jersey dress is out of stock at London stores — only 24 hours after royal bride-to-be Kate Middleton was seen wearing it.

Buying director Averyl Oates told Vogue UK: “Since the announcement of the royal engagement we have been inundated with requests regarding Issa. The dress worn by Kate sold out almost immediately.”

The Issa dress is priced at £385, which is about $616, and looked beautiful next to her blue sapphire engagement ring.

Middleton has worn this designer before, causing speculation that she will have Issa London design her wedding dress.

“We are thrilled with the engagement news and I’m very happy that she has chosen to wear Issa today,” Issa designer and friend of Middleton Daniella Helayel told People. “She is a very pretty and lovely girl.”

This isn’t the first time Kate has caused a dress to sell out overnight! She wore a black and white retro tunic dress from Topshop for her 25th birthday in 2007 — and it too sold out immediately!

Tell us: Do you think Kate is following in Diana’s footsteps to be the next style icon?