An attorney for Dina Lohan is speaking out against an episode of Glee in which the substitute Spanish teacher, played by Gwyneth Paltrow, mocks Lindsay Lohan’s multiple trips to rehab. 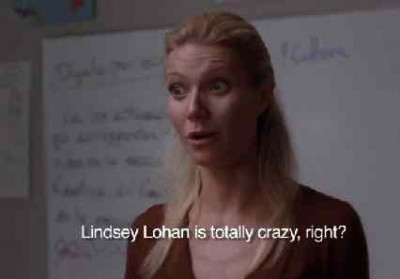 That might be a valid argument if Lindsay hadn’t mocked her own drug problems on the 2010 MTV VMAs.

The dialogue went like this: In Spanish with English subtitles, Paltrow’s character asks the class, “Lindsay Lohan is totally crazy, right?”

Dina Lohan told Gossip Cop, “Our lawyers are sending a letter” to Glee on the grounds that the show allegedly defamed Lindsay.

Think a lawsuit about this is as loca as Lindsay? Maybe, but remember that lawsuit she brought against E*Trade? It was settled out of court for an undisclosed sum, said to have been nicely in Lindsay’s favor.

7 hrs ago
by Tabby Kibugi