Susan Boyle is making history. Again. And you know what we love? When good people have great things happen for them and that is the story of Boyle. 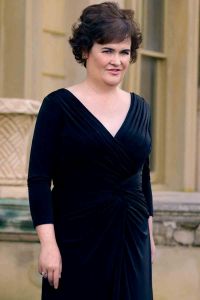 Susan Boyle made a name for herself when she appeared on the UK reality show, Britain’s Got Talent, in April 2009.

What started as a cruel joke, hyping her sad sack, never been kissed existence with just her cats and a dream to keep her company, turned into mega-stardom the moment she opened her mouth to sing I Dreamed a Dream from Les Miserables. Boyle’s performance turned the audience and the judges to grinning, weeping and cheering instant fans.

The 49-year-old Scottish singer went on to finish second in the competition but had major chart-topping success with her debut album, aptly titled, I Dreamed a Dream, which became 2009’s biggest-selling album in the world, selling 9 million copies.

With her follow-up record, The Gift, Boyle is earning even more historic accolades. She just became the first female artist in history to simultaneously have a number one album in the US and the UK twice in less than a year. The only other musicians in history who have achieved that distinction were the Monkees in 1967 and the Beatles in 1969. That is some serious company to keep!

In a statement, Boyle said, “I’ve never felt happier in all my life. This is an amazing result and one I never expected.”

Britain’s Got Talent creator and head judge, Simon Cowell said, “I’m thrilled for Susan, she has once again defied the odds. She is my superwoman.”

We love that she’s living the dream she dreamed!