Derek (Patrick Dempsey) didn’t win Chief Webber’s (James Pickens, Jr.) contest for funding a few weeks back, but this week he lands the grant he needs to start his clinical trial. When the attendings take Seattle Grace’s top doc out to their local hot spot, the first round is on Bailey (Chandra Wilson), but boy are they in for a surprise at their local watering hole, Joe’s. 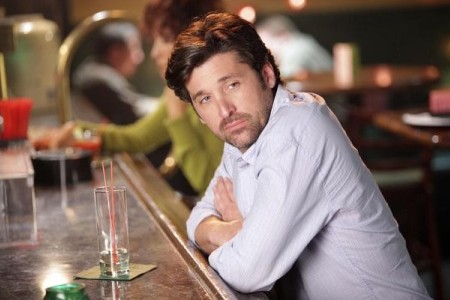 The Seattle Grace docs are certainly in need of a good time, but their celebration may escalate to marital drama when Joe’s new barkeep goes overboard. Owen (Kevin McKidd) is not likely to enjoy seeing his missus give a patron a lap dance.

Speaking of lap dances, it looks like libidinous Callie (Sara Ramirez) and Sloan (Eric Dane) are in for a return to the bedroom, assuming they actually make it to the bedroom! Callie may be playing both sides of the field, however, since she also gives her number out to a sexy redhead.

One thing’s for sure on tonight’s Grey’s Anatomy: If best pals Callie and Sloan do go back to being friends with benefits, Callie’s ex won’t be please or surprised, but Callie won’t have to deal with that drama until Jessica Capshaw’s maternity leave ends and Arizona returns from Africa.

With everyone else off partying and new pediatrics attending Stark (Peter MacNicol) MIA, Meredith (Ellen Pompeo) and Karev (Justin Chambers) are stuck covering the night shift. The evening gets tense as the duo tries to juggle a pushy mom whose post-surgical son is deteriorating fast.