Tiger Woods has written an essay detailing how his years of bed-hopping were caused by his arrogance over his golf talent. 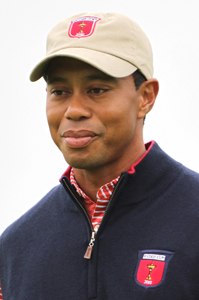 Almost a year after the car accident that broke the scandal of Tiger Woods’ ridiculously prolific infidelities, the golfer has written a belly button-gazing essay for Newsweek discussing the difficulties of the past 12 months.

“The physical pain from that car accident has long healed,” Woods wrote. “But the pain in my soul is more complex and unsettling; it has been far more difficult to ease — and to understand. But this much is obvious now: My life was out of balance, and my priorities were out of order. I made terrible choices and repeated mistakes. I hurt the people whom I loved the most.”

“Golf is a self-centered game, in ways good and bad,” he wrote. “So much depends on one’s own abilities. But for me, that self-reliance made me think I could tackle the world by myself. It made me think that if I was successful in golf, then I was invincible.”

Tiger also says that nowadays, since his golf game sucks and no one wants to bed him, he is spending quality time with his kids.

“I’m learning that some victories can mean smiles, not trophies, and that life’s most ordinary events can bring joy,” Woods wrote. “Giving my son, Charlie, a bath, for example, beats chipping another bucket of balls. Making mac and cheese for him and his sister, Sam, is better than dining in any restaurant.”

As for the reported sex tape that proved to be a fake? He says it is par for the course. “Opportunists are trying still to cash in on my troubles, no matter how irresponsible or ridiculous their claims may be. In many cases, I’ve never even met these people,” Woods wrote. “But there’s no way I can dispute each lie without provoking more. Besides, everyone has probably heard more than they ever wanted to about my private life.”

Amen to that. Where has Elin been lately? Inquiring minds want to know how she’s been spending that crazy Tiger divorce payout.