Gwyneth Paltrow recently sang a version of Cee Lo Green’s Forget You for her Glee debut. So, what did Green think of Paltrow’s TV friendly version? The singer had nothing but rave reviews for the Oscar-winning actress.

Gwyneth Paltrow is a triple threat — there’s no doubt about it. But when actors join the cast of Glee there’s one thing they need to ready themselves for — critiques from the artists they’re channeling. Gwyneth Paltrow is no exception to the rule. 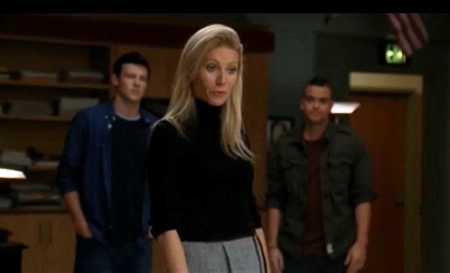 When it was announced that Gwyn would sing a censor friendly version of Cee Lo Green’s F*** You and call it Forget You, the skepticism was definitely out there. In true Paltrow fashion, she won fans over during her November 16 Glee debut, but what did Cee Lo Green think?

Green weighed in at the Absolut Glimmer party in New York City. “I think she did awesome,” he raved to UsMagazine.com.

The 38-year-old actress was definitely on Green’s radar. “I didn’t really realize how accomplished she was as a vocalist. She sounded great. She sounded better than me!”

That’s a big nod coming from Cee Lo Green. Gwyneth Paltrow has not failed us yet when it comes to her vocal stylings. She recently made her CMA debut with the title track from Country Strong to a standing ovation and with Cee Lo Green’s blessing she must be walking on perfectly pitched air.

Can’t wait for more Gwyneth Paltrow to hit the scene? Check out Country Strong out in limited release in December and everywhere January 7.