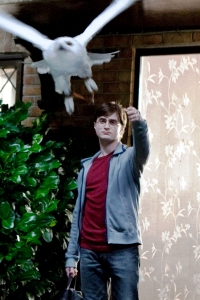 Yates truly made his mark directing the thrilling BBC mini-series State of Play that was eventually remade in America with Ben Affleck and Russell Crowe.

That amazing work caught the eye of Harry Potter producers who invited him to take over and film Order of the Phoenix.

After a musical chairs of directors passed through the franchise beginning with Chris Columbus, it immediately became clear Harry Potter found his director for the rest of the franchise.

Yates sits down with SheKnows in London the day after the film premiered and takes us inside the world of Harry Potter and the Deathly Hallows and talks about how thrilled he is with the performances of his three leads — Daniel Radcliffe, Emma Watson and Rupert Grint.

SheKnows: First of all, amongst the big tasks for tackling Harry Potter and the Deathly Hallows was where to split the films. How did you decide on a splitting point?

David Yates: We had two endings originally. One was Dobby’s death, ending in a very melancholic way, on the beach, looking out to the dark, threatening sky. That wasn’t quite right because it felt too somber, in a way. Then we ended on a real cliffhanger, with Harry on the gates, Bellatrix parts his hair, we see his scar and we know they’ll be stuck now, taken to Malfoy manor. Then I had a scene in my head that I wanted to do right from the beginning. I thought, “Wouldn’t it be cool if you saw Voldemort together with Dumbledore, and if he desecrated Dumbledore’s grave?” I had this scene in my head and I didn’t know where to put it. I was going to begin the second movie with it, because I thought, “Opening the second movie with this would be really fun.” So I said, “Let’s shoot it, and we’ll put it at the beginning of the second movie.” But because those two endings didn’t work [laughs], I put it at the end of the first movie and showed it to the guys and we all felt the same — it’s a fun way to go out. It teases you up for Part 2, which has lots of fights and battles. 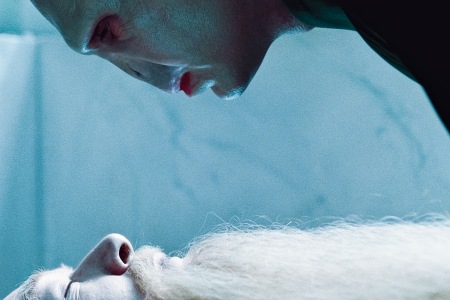 SheKnows: Did having two movies make it easier to get in all the aspects of the final Harry Potter book that you wanted? Also, why two movies and not one?

SheKnows: We talked about how the film ended, but can you talk a little about your decision of how the film began and the close-up on Bill Nighy’s eyes? 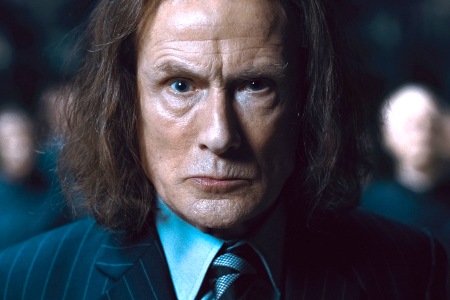 David Yates: I really wanted to break away from the elegant openings of the past. I think you start to predict how the first two scenes are going to be in a Harry Potter movie. You go through the “WB” and then there will be elegant transition. And I said, “Oh God, let’s break that.” I thought, “It immediately grabs your attention.” I love the idea of the Horcrux in the sand, and if I could make it even louder I would. I love the idea of everyone sitting in the dark, being denied only images, feeling this horrible thing around them and then suddenly [snaps his fingers] there’s this weird pair of eyes. It was an attempt to break the rhythm of how the last two movies started, and jolt the audience into a sense of, “Oh, this is different than how we’re used to starting.” The ambition behind that was to make it more surprising and visceral and odd — to be slightly uncomfortable.

SheKnows: Lots of fans are talking about the kiss between Harry and Hermione. Take us inside the decision to put that in the film and what the shooting process was like.

David Yates: We had a closed set, to make them feel comfortable. There were issues around the nudity — ratings were concerned. I didn’t want Dan and Emma to completely strip down because it’s uncomfortable. So we had them in jeans and stuff. The studio was nervous about it and the ratings guys came back and said, “We’re going to have to slap on a sensuality notice on the front of the film.” The studio requested that we try and put more smoke to cover them up, which I tried, but it just looked like they were in a sauna [laughs]. And there’s the whole moment of Rupert watching them, so you cut to Rupert then you cut to them and you see these two heads and all this steam. So I phoned them up and said, “Guys, I have a version that keeps some sensuality and we have to do it.” So we stuck with a slightly more sensual version. There is another version that’s even naughtier [laughs]. 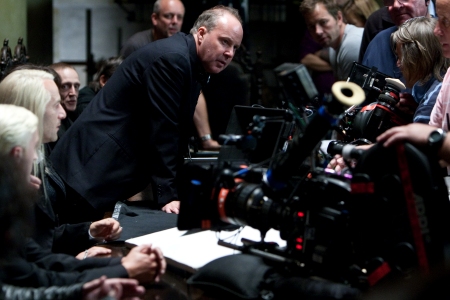 SheKnows: Are you concerned that young children may be too scared from the film version of Harry Potter and the Deathly Hallows?

David Yates: Well, you know, I liked being scared as a kid. I like being scared. I used to watch Doctor Who while hiding behind the settee, as you do. But I think parents have to be careful, it’s got a PG-13. It’s got the right rating on it. I have seen children come out of the theater, we’ve had several screenings. The boys particularly like it, they get really buzzed by it. Would I take my kids? I don’t have children, but if I did, if they were nine or ten or eleven, I don’t know. Exercise caution.

SheKnows: The use of animation to show the story of the Deathly Hallows was brilliant. Why did you choose to go that route? 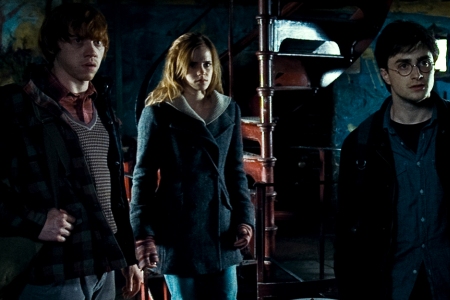 David Yates: That all started with Stuart Craig, who’s the wonderful production designer. We were thinking of a live-action route, but I don’t think it would have worked. It would have felt a bit clunky. And then Stuart came up with these wonderful shadow puppet images from the Victorian era, which was absolutely glorious. Then we found this wonderful guy named Ben Hibon who’s an animator and he supervised the whole sequence for us. I just wanted it to feel really elliptical. I wanted it to feel like we were going to a different place, basically, to transcend where we were. It’s actually really hard to step outside the movie for three minutes and stop the movie for a story [laughs]. It had to be really beautiful.

SheKnows: Finally, I’d love to discuss the tent scene where Harry and Hermione dance together. How did you come across the Nick Cave song and why did you want that scene in the film? 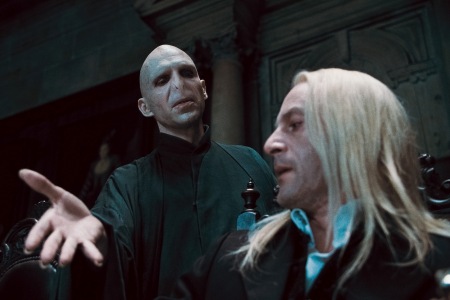 David Yates: [Writer] Steve Kloves said to me — we were working away in the office — and he says to me, “This might sound really weird, but I could see them dancing,” and the minute he said that, I said, “My God, you’re right, that would be great. Let’s make that work. Let’s try that.” And it’s a scene that seems to divide people — some people love it, some people absolutely hate it. I love it, that’s why it’s in the movie. I find it very tender, very funny, very moving. For me, it’s about them becoming grown-ups, growing up in a very painful way. I got a wonderful choreographer named Anthony Van Laast, and I know it doesn’t look very choreographed, but actually, it is. It was all about the awkwardness of the moment, letting go a little bit. I like the notion that they find comfort in each other when everything seems to be falling apart. It seems like a very natural thing to do — trying to provide warmth for each other as friends. For me, it’s a very special moment in the film — but I know it drives some people nuts [laughs].

David Yates: I needed to find a piece of music that was melancholic. It had to fit the tone of that section of the movie, but also lift you up, in a weird way. It’s hard to find that tone in a song. I had a chap named Matt Biffa, who is a wonderful music guy, send me lots of tracks from everything. I listened to hundreds of these things and I was almost giving up hope, and I thought, “Oh, there’s nothing quite like what I can feel in my head.” And then I pressed play and Nick Cave started, and I was like, “This is it.” My biggest fear was playing it for Dan and Emma, cause I thought, “God, are they going to understand?” Because it was important to me that they understand the music as well, that they felt it. So I played it for them, and it was my most nervous moment, and I played it for them and I was like, “Oh God, are they going to like it?” and they loved it.