For our latest exclusive excerpt from the newest Chicken Soup for the Soul book, A Book of Miracles, Theresa Chan has written a story about a miracle from the heart of the Renaissance in Italy! 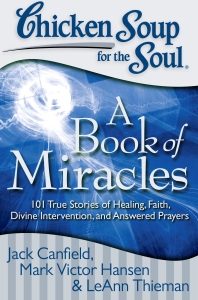 If you seek an angel with an open heart… you shall always find one.
Author Unknown

On a sunny November morning in Milano, Italy, my friend Rick and I headed to the Duomo, the centre of the city, to take some photos. We stopped at a little cafe, and as Rick stood in line to order, I opened my purse.

My wallet held my passport, credit cards, driver’s license, insurance, and almost 500 euros in cash. I had always felt safe in Italy and never had any issues with pickpockets, so I was certain my wallet must have fallen from my purse when I’d taken out my camera.

“I’m not going to worry,” I calmly told Rick, as we walked back to the Duomo. “All my life I’ve believed in angels. I trust a nice person picked up my wallet and it will be returned to me.”

I am not sure whether Rick shared my belief; I think he was just thankful I remained so calm.

Arriving at the Duomo, the carabinieri [police] were out in full force. Rick approached one of the officers and explained my situation. The policeman gave us directions to the Lost and Found and we followed the route he suggested.

But fifteen minutes later, we realized we were lost, so we retraced our steps to the Duomo. I decided to head to the Tourist Office, highly optimistic that another traveler had picked up my wallet.

My optimism waned when we were told that no one had handed in a wallet. With new directions, we headed off again to the Lost and Found where their reply was the same. Two dead-ends.

At that point, I questioned whether I would ever find my wallet; the chances were getting pretty slim. Because I had lost my passport, I needed to fill out a report at the police station. While walking there, I had a philosophical conversation with Rick as to the meaning of it all. It felt quite surreal walking in a foreign city knowing you had no ID and no money. I was okay with losing my passport and ID, as I knew those items were replaceable. I was upset, though, about the little red envelope containing 200 euros that I had tucked in my wallet. My friend Renee gave it to me to spend on something special in Italy. I knew that even if I got my wallet back, the cash would probably be gone, along with the opportunity to spend her generous gift.

Outside the police station, a man in a booth directed people where they needed to go. He instructed us to turn left. As Rick headed off, I paused, debating whether I should phone and cancel my credit cards.

“Theresa, are you coming to fill out the report?” Rick yelled.

An older gentleman, standing near the booth heard Rick and asked, “Have you lost something?”

The gentleman looked at me and asked my name.

“Theresa, there is your wallet,” he said, pointing to the man in the booth.

I approached and there, lying open on the desk, was my wallet! I saw my ID and even the red envelope, torn open with no money inside.

“Rick, my wallet was found and turned in!” I shouted.

The gentleman confirmed that he was the one who’d found it. When I looked into his kind eyes, I knew he wouldn’t have taken my money. I expressed my thanks and how grateful I was.

I entered the booth to pick up my things and my intuition told me to look to the left. There in the corner of the desk was a stack of 50-euro bills.

The man in the booth asked if I had everything.

I calmly said, “Yes, all my ID is here and that is my money,” I said, pointing to the pile of cash.

He agreed and I counted the money. All 500 euros were there!

Rick was talking with Carlo, the kind gentleman who’d found my wallet. Carlo was saying goodbye, so I quickly gave Rick a 50-euro bill to give to him as a token of my gratitude.

Carlo refused to take the money.

I grabbed my things and rushed out to stop Carlo from leaving. Pleading with him I said, “Please Carlo, is there anything I can buy you to thank you for finding my wallet?”

He thought for a moment and then in a typical Italian response he said, “Okay, un caffe.”

We crossed the street and I ordered espressos. We sat down and Carlo told his side of the story.

When he found my wallet on the Duomo floor, he opened it to realize a Canadian tourist had lost all her ID. He phoned his lawyer friend to find out what to do and she told him to go to the police station and fill out a report. He walked to the station and met the man in the booth, who took the wallet without writing down any information. Carlo left the booth but felt uncomfortable about what had happened so he phoned his friend back. She insisted that he return to the station and fill out a police report. At the booth, Carlo saw the wallet ripped open with all the money to one side and wondered what was going on. At that precise moment, he saw me standing there and heard Rick call out.

Rick and I sat in awe. We couldn’t believe all the coincidences and the magic of it all.

Looking into Rick’s eyes, I expressed what I knew was true. “Rick, meet my angel Carlo.”