Better With You is better with Reba McEntire on November 17! The Middle takes on maturity, Modern Family tries to celebrate a birthday and the Cougar Town clan meets Trav’s new gal on ABC Wednesday.

The Middle kicks off the laughs with the episode Errand Boy at 8 pm. Tired of being his mother’s (Patricia Heaton) sidekick during her weekend errands, quirky Brick (Atticus Shaffer) insists he’s mature enough to stay home on his own. Axl (Charlie McDermott) takes his own swipe at maturity when the football team decides to grow beards for the big playoffs, but his growth doesn’t go as smoothly as he expects. 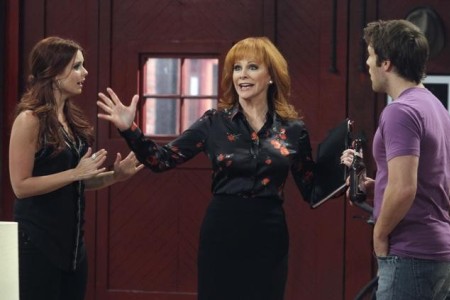 Meanwhile, Mike (Neil Flynn) faces a dilemma when he overhears one of Sue’s (Eden Sher) friends dissing her. It seems there’s a slumber party and Sue’s not invited, for “her own good,” of course.

Then Reba McEntire gets in on the laughs on Better With You at 8:30. The country crooner reunites with her Reba daughter JoAnna Garcia when Mia hires the hottest wedding planner around, Lorraine Ashley. Mia and Casey (Jake Lacy) are smitten with Lorraine’s southern charm and great connections, but things take a turn when the redhead shows up with a ring on her finger. Meanwhile, Ben (Josh Cooke) realizes he’s lost his ability to flirt and decides to get back in the game with a little help from Maddie (Jennifer Finnigan) and Casey.

At 9 pm, it’s Manny’s birthday on Modern Family. In Dash, Flash, Crash, the clan tries to come together to celebrate Manny’s (Rico Rodriguez) special day, but the guest of honor may not make the party. In fact, it’s possible no one will. While Jay (Ed O’Neill) and Gloria (Sofia Vergara) bicker over the lost keys to her car, Manny falls into an early-life crisis. The mature kid realizes he may have cheated himself out of a childhood.

Across town, Mitch (Jesse Tyler Ferguson) and Cam (Eric Stonestreet) get held up during a last minute gift run to the mall, while Phil (Ty Burrell) and Claire (Julie Bowen) are held back by their competitive natures. After the topic of the Dunphy’s annual visit to Family Camp comes up, the couple gets in a not-so-friendly car race. St. Elsewhere alum Norman Lloyd and Norma Michaels guest star as Donald and Helen.

Cougar Town rounds out the comedy block with Little Girl Blues. Jules (Courteney Cox) is all smiles when Trav (Dan Byrd) brings home his first college girlfriend (Collette Wolfe) and the guys are impressed he’s nabbed an older woman. Then Ellie’s (Christa Miller) comment about daughter-in-laws sends Jules into a tailspin and the neurotic mom is forced to face the inevitability that her son will one day marry. Meanwhile, Grayson is annoyed his pad has become the new cul-de-sac crew hang out.