Chad Ochocinco is reportedly set to marry Basketball Wives star Evelyn Lozada. Who wants to take bets on how long this will last? 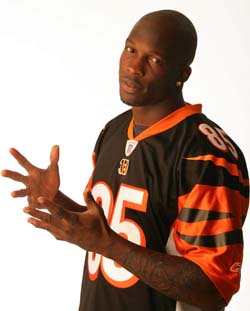 Eccentric Cincinnati Begals wide receiver Chad Ochocinco is set to marry Evelyn Lozada, his girlfriend of four months. Isn’t that just the way it works? Eva Longoria and Tony Parker break up and they announce their engagement.

Ochocinco proposed to Lozada yesterday after she flew to Cincinnati from Miami for a visit. Instead, he surprised her with a 10-carat engagement ring. Yowza!

Lozado then took to Twitter to show off her bling.

“I’m no rabbit but 10 carats looks good on me!! Let the hating begin,” she tweeted.

Who is Evelyn Lozada?

The Brooklyn-born, Bronx-bred Lozada moved to Miami in 2007 and opened a shoe boutique, Dulce, which she now co-owns. She’s also an aspiring model and actress and was previously engaged to NBA player Antoine Walker. Her engagement to Walker led to a stint on the reality show Basketball Wives.

We’re interested in see how long this relationship will last — a short four-month relationship and a couple who obviously loves the spotlight doesn’t usually equal lifelong wedded bliss.

Take our advice, Ochocinco: You should probably focus on football right now. Your Bengals aren’t doing too hot right now and it’s already deep in the season. Oh, what are we kidding? We don’t care about football! We just want another season of Ochocinco: Ultimate Catch.