Ryan Reynolds has the looks, the charm, the smoking career and Scarlett Johansson as his wife — and now he has the honor of being named People Magazine‘s Sexiest Man Alive 2010. 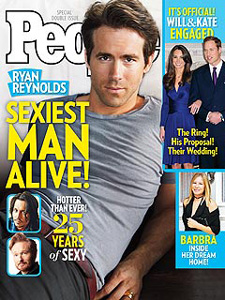 “You just have to go with the flow. This gives my family entree into teasing me for the rest of my life,” Reynolds says of his new sexy title.

The 34-year-old, 6-foot-2-inch Canadian proved he is as funny as he is sexy, co-starring alongside Sandra Bullock in the hit comedy The Proposal. He will next be gearing up to play The Green Lantern next year — which gives us the perfect chance to take a peek at his amazing body.

“My body naturally wants to look like Dick Van Dyke,” he joked. “When I stop training, I turn into a skin-colored whisper.”

What does Scarlett think?

Will this new title earn him points with his wife of two years, actress Scarlett Johansson? You betcha!

“Now it’s going to be, ‘Sexiest man, take out the garbage.’ That does sound better,” he said. “The most difficult part is going to be organically working this title into a conversation with random strangers.”

Check out these cocktails inspired by past sexiest men. What should we call Ryan’s? The Green Lan-tini? Leave a comment below and share your ideas!

Reynolds’ new title puts him in the same category as past winners, including Johnny Depp, Hugh Jackman, Matt Damon, George Clooney, Brad Pitt and Matthew McConaughey. Guess who was the first celebrity to win the title of Sexiest Man Alive in 1985? That honor went to Mel Gibson.

read on for More Ryan Reynolds