It’s safe to break out the baby gifts, Pink confirmed her pregnancy during an appearance on The Ellen DeGeneres Show. 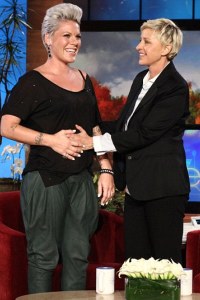 Pink spilled the beans about her growing baby bump during a stop on The Ellen DeGeneres Show this week.

On the show airing Wednesday, November 17, the 31-year-old singer showed off her little pooch explaining, “I’m eating for two these days.”

This will be the first baby for Pink and husband Carey Hart. She revealed to Ellen DeGeneres why she chose to keep her pregnancy private until now.

“I was just really nervous,” Pink explained. “I have had a miscarriage before, but if I was going to talk about it with anyone, it was going to be with you.”

The rocking mommy-to-be is also making one thing clear. Her baby was no accident. “I worked for it. It was not an ‘Oops,'” she told Ellen DeGeneres.

Still no word on whether or not Pink and hubby Carey Hart will find out the gender of their baby, but she did tell DeGeneres what her doctor thinks. “The doctor kind of told me what she thinks,” Pink admitted. “I’m terrified because she thinks it’s a girl!”

Why so scared, Pink? That would be one fierce baby girl. “My mom has always wished me a daughter just like me,” she kidded. “I’m terrified one of us will go to jail.”

Pink added in regards to her relationship with Hart and life: “I never had anything in my life that I didn’t work hard for and my relationship is that. We worked really hard and we had our little meltdowns, a couple of them. We both needed to do that and come back together. It’s just yummy!”

SheKnows would like to offer our official congrats to Pink and Carey Hart!