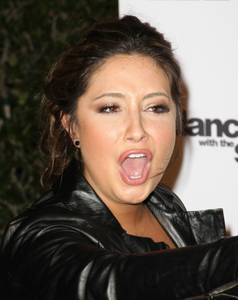 Willow read it and unleashed her inner hillbilly. “Haha you’re so gay,” she wrote. “I have no idea who you are, But what I’ve seen pictures of, your disgusting… My sister had a kid and is still hot [sic].”

Some other choice messages from Willow in the same message thread:

“Sorry that you guys are all jealous of my families success and you guys aren’t goin to go anywhere with your lives.”

Even her big sister Bristol Palin got in on the act. First she wrote to Tre, “You’re running your mouth just to talk sh*t.”

Then Bristol wrote to a guy named Jon, “You’ll be as successful as my baby daddy.” We think it’s safe to assume she was being sarcastic about Levi Johnston’s station in life — or lack thereof.

Not that Bristol cares — she has bigger fish to fry. Bristol Palin’s stay on Dancing With the Stars has somehow progressed to the finals.