Dancing With the Stars revealed the final three during the live semifinals results show and it was curtains for Brandy and Maks. 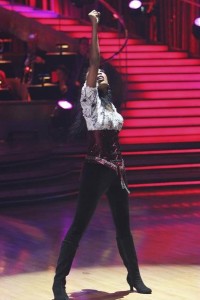 Season 11 of Dancing With the Stars is coming to a close, but there was still another cut to be made during the semifinals results show.

The show opened with an encore of Brandy and Maks’ perfect scoring Argentine tango from last night’s competition. Watching them dance again had us hoping our prediction of them in the finals would come true.

Tom Bergeron got right down to business with the first couple to move on to the finals — Jennifer Grey and Derek Hough. We had called this couple to be the ones sent packing. Hey, we weren’t the only ones.

Kyle Massey and his gyrating hips were also sent on to dance another day and race for the mirrorball trophy with partner Lacey Schwimmer. This left Bristol Palin and Mark Ballas to sweat it out with Brandy and Maks Chmerkovskiy.

On to happy news, Annie Lennox came out to perform two beautiful songs, including a rendition of Little Bird complete with dancers and bird-like choreography. Enrique Iglesias brought Latin flair to the floor with his hit I Like It.

This season of Dancing With the Stars produced more shocks than perhaps any other season and it was definitely a twist to see Brandy and Maks in the bottom two. Unfortunately, one had to leave and it was time for Brandy and Maks to hang up their dancing shoes. We can already hear the gasps around the country. This was not expected at all, but it has been an unpredictable season. The Bristol Palin haters will be lighting up the blogosphere for sure.

With the season 11 Dancing With the Stars finale set to feature Jennifer Grey, Kyle Massey and Bristol Palin, who will take the mirrorball trophy? Stay tuned to SheKnows for all the DWTS finale coverage.