SheKnows: When you took the breaks to do the other films, were you able to take something away from those other projects that you brought back to the Harry Potter set? 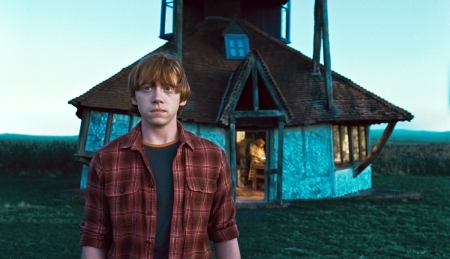 Rupert Grint: I definitely think so, the more people you work with, you learn. It’s really nice to see how other films are made. Harry Potter is kind of a unique experience filming-wise. I know I will never experience anything like that again and it’s nice to see how other filmmakers make movies. I guess you could say I wanted to see what the real world was like [laughs]. It’s nice.

SheKnows: One of the series’ greatest assets is you got to work with so many different directors who come with their own visions to the table. Are there specific things from each director in the series that you took away and made Ron more complicated or aided in your process — words of wisdom that they have bestowed on you over the years?

Rupert Grint: Yeah, I’ve been really lucky to have worked with some amazing directors. I think you do learn something from each of them. They are all so different. They all have their own style and bring their own thing to the films. David, I suppose, because he’s been the most consistent, I feel actually quite close to him. He’s just so easy to approach.

Rupert Grint: It was a surreal scene. Meeting our kids for the first time as well [laughs], they actually did resemble us. It scared me a little bit. Just looking old is not something I’m looking forward to — Ron ages very badly [laughs]. It’s quite frightening.

SheKnows: The locket scene was really scary, how easy or difficult for you was it working with the green screen to provoke such strong emotion? 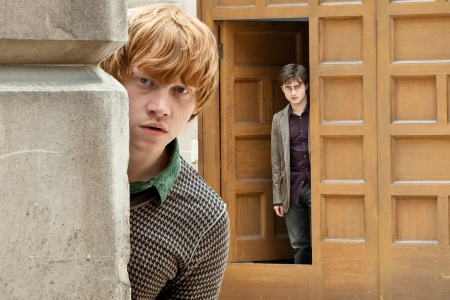 Rupert Grint: It’s a big moment for Ron. It’s the rare moment for Ron to stand up like he did and be a bit of a hero by destroying the Horcrux. There’s a lot going on there with the Horcruxes projecting all Ron’s insecurities about his family and his thing with Hermione. It was a really cool scene to do. It was kind of hard to react to nothing, I couldn’t see anything. It was nice to do that with Ron.

SheKnows: What were you able to see, or hear?

Rupert Grint: They did play the voices of Daniel and Emma, which really helped. I knew they’d be kissing and stuff. It was weird.

SheKnows: Did you know they’d be naked?

Rupert Grint: [Laughs] I did not know that.

SheKnows: What do you personally most enjoy about Ron?

Rupert Grint: I can’t really put my finger on it. He was always really my favorite when I was reading the books. I felt a strong connection to him and maybe Ginny too. I just really liked his character. He was the underdog and I kind of liked that.

SheKnows: It’s really uncommon for a cast like this to come together and have it extend for a decade. What do you attribute to everybody holding it together?

Rupert Grint: I don’t know, really. But, I would guess…the books. The whole world that she’s created and people really love. Seeing us grow up, I suppose, is really a unique thing.

SheKnows: You’ve finished 10 years of straight work, are you relaxing and taking time off or are you looking to go to Hollywood and go on auditions…drum up more work? What’s your take on what you want to do next?

Rupert Grint: I’m not in a real rush. I’m kind of waiting for the right thing. It’s nice to have a bit of a break. I’m quite exhausted after this one. I would like a bit of time to catch up. I’m going to take the rest of the year to find something different.

SheKnows: Are you taking anything away from the franchise, even a piece of the set? What did you take away from Harry Potter that is important to you?

Rupert Grint: Physically it’s quite hard to come away with anything because they watch it all quite close. I did steal, on the last day. I unscrewed the number on Ron’s home, the door number. I’ve got that. They gave me the deluminator as well. That’s nice.

SheKnows: What are your emotions now that you’re coming to the end? Are you excited about the future? Are you missing it already?

Rupert Grint: I will always miss it. It has been such a massive part of my life. It’s going to take a while for it to sink in that I won’t be doing it again. The last day was quite sad. I was surprised how emotional we all got. It’s a weird feeling. But, it is a good time to finish. I’m ready to do something more.

SheKnows: After one film, you say goodbye to a character. After 10 years of a character, how long do you think it will take to decompress from Ron?

Rupert Grint: I still haven’t fully gotten there. I don’t know, it’s going to take a while to grasp that I won’t be going in every day. It has been half my life. I don’t remember life before this.