Rupert Grint has grown up right before our eyes in the Harry Potter series. The young actor was cast as Ron alongside Daniel Radcliffe and Emma Watson, before most children knew what they were going to do with their lives. Grint, on the other hand, took the job as Ron in the Harry Potter franchise and knew exactly what his plan would be for the next decade. 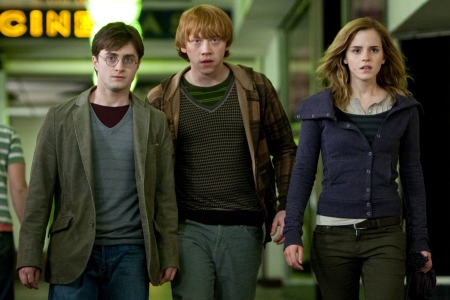 Rupert Grint hasn’t only played Ron for the last ten years. He recently starred opposite Bill Nighy in Wild Target and appeared in the cult favorite Cherrybomb. Acting is definitely still in Grint’s future, but as he admitted to us recently in London, unlike Daniel Radcliffe and Emma Watson who have their next few years figured out, he’ll take his time figuring out what’s next, post-Potter.

SheKnows: Was Harry Potter and the Deathly Hallows more physically demanding than the rest of them? How did you deal with a shoot that was 260-plus days?

Rupert Grint: This one was rather physical, I think. They’re out in the real world, and no longer at Hogwarts, so they are in this really dangerous environment. Wherever we go, we are risking our lives. There was a lot of running [laughs], which is really something I’m not used to. We have run in the other movies, but in this one, we changed the way you do the runs as well, there’s much more of an aggressive tone to it.

SheKnows: Being away from Hogwarts on location, how was that experience different for you, versus being in a studio or on a soundstage? 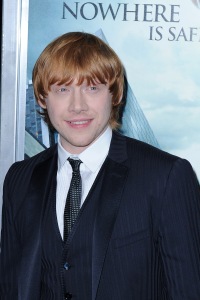 Rupert Grint: It was nice to get out. Without having Hogwarts there, we didn’t get to see any familiar sets. We were just on the run, camping out. It was good, interesting.

SheKnows: We heard that you had to leave the Harry and Hermione kissing scene because you were laughing so much, is that true?

Rupert Grint: Actually, I was sent out. They were wearing this silver body paint. It was all really surreal [laughs].

SheKnows: Well, Daniel Radcliffe was sent away when you kissed Emma Watson.

Rupert Grint: Yeah, he was [laughs].

SheKnows: We talked to Daniel about the difference in making the first film that was essentially “do this, do that” and now working with David [Yates] where you are seasoned actors, could you talk a little bit about how you continue to tackle Ron and make him fresh or bring something new to the table?

Rupert Grint: David’s great, he really gives you a freedom. You feel that you can kind of go at it on your own. You can do a lot, really. It’s nice to have it. Over the years, over the last 10 years now, I’ve kind of become this person [Ron]. It’s really quite easy to fit back into him.

SheKnows: Once in a while, you must see some of the first movies on TV, do you look at it and think, “Oh, my God, I look so different?”

Rupert Grint: I can’t go back and not notice the difference in all of us from the early films. It has all happened before our eyes. It’s really hard to still relate to how we were in those early films. It all feels very different now. But, you know, I’ve always got that. It’s like a really expensive home video of me growing up [laughs]. I can always go back on that.

SheKnows: How much did you know about Ron from consulting JK Rowling?

Rupert Grint: I’m not sure, really. She didn’t give me any clues. I just kind of read it for myself. That was one of the things I feared most about making it as we went along, there were a lot of characters dying.
SheKnows: Do you go back to the books when you start filming to reacquaint yourself with the stories and characters as far as where they are in the process?

Rupert Grint: I do reread the books before we start, to get it fresh in your head. I think it’s quite helpful.

SheKnows: At what point did you find out that Ron and Hermione were going to get together? And, what was your conversation with Emma like when you two found out? 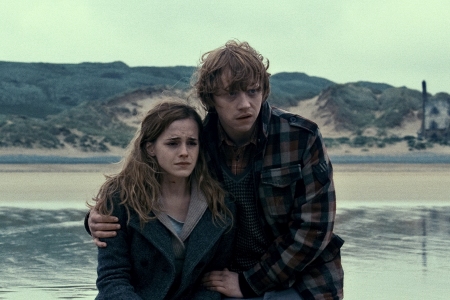 Rupert Grint: There’s always been this subtle thing between them. In this one, you can see the jealousy in Ron’s part. We definitely get the sense that there is something going on there. In the second part, you get to see that develop more. It’s kind of strange, particularly the kiss scene. It didn’t feel natural, really. Actually, also I was quite surprised how much we saw into the epilogue. We get married and have kids, I was advised of that.

SheKnows: You’ve shot a few movies in between these movies, how much actual time off do you have between Potter films? With this film, you’re in almost every scene over that long shoot…

Rupert Grint: Almost every day I was filming for that entire shoot, yeah. It was a long shoot. You don’t really have a lot of time between your time shooting. And in the past, whenever I’ve had a Harry Potter break, it’s been a few months break and I’ve kind of wanted to do something else really, just to see how other films are made. I’m really glad I did the other films, but it is nice to have a bit of a break now to just kind of relax and do normal things.

Up next…Rupert dishes what’s next and gives more clues into Harry Potter and the Deathly Hallows!