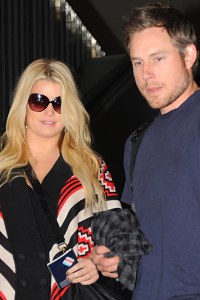 The moment Jessica Simpson announced her engagement to former NFL player Eric Johnson, just a week-and-a-half after her ex Nick Lachey announced he’d be marrying his girlfriend, Vanessa Minnillo, we smelled a rat.

The timing was too synchronistic and too speedy. Nick’s been with Vanessa for four years, Jessica and Eric have only been together since May 2010 and he wasn’t even officially divorced from his wife of five years, Keri Johnson, until October.

Lachey announced his engagement on November 4, Jessica countered with her announcement on November 14. That seems like just enough time for Papa Joe, Jessica’s creepy father and manager, to orchestrate a press release and a photo op.

Adding to our suspicions that something fishy is going on, rumors are flying that Jessica bought her own $100,000 ruby and diamond engagement ring.

A source close to Simpson and Johnson said, “No way could Eric, who doesn’t have a job at the moment, afford to purchase such an expensive ring. Yes, he made a little bit of money in the NFL and is from a wealthy family, but unless his parents helped him out, Jessica must have paid for it herself.”

Did Jessica also get down on one knee and propose to herself? Was Eric even in the room when all of this happened or was it a negotiation, Tom Cruise-style, between representatives?

Marriages of convenience are nothing new in Hollywood. Done to propel careers, hide sexual tendencies or forge an unstoppable power couple, weddings can be as strategic as paparazzi photos, and just as calculated.

That’s what this seems like if you ask us.