Rihanna’s new album, Loud, has been released to great reviews by critics and fans. 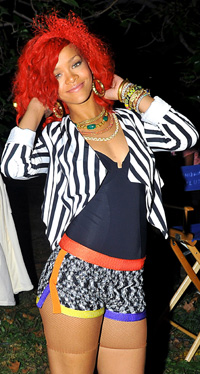 Rihanna learned from her 2009 album Rated R that fans like the happy, upbeat Rihanna — as opposed to the moody and dark Rihanna. True, she did have quite the tumultuous year in 2009 with the Chris Brown incident, however, with the release of Loud, it seems she has put her dark past behind her and is ready to have some fun!

Taking a peek at today’s iTunes, Rihanna’s Loud is number two, topped only by the Glee Christmas album. As far as singles, the catchy What’s My Name featuring Drake is ranked at number four, while Only Girl (In the World) comes in at number seven.

“Loud is, at points, a powerful reminder of Rihanna’s skills before the 2009 Grammys incident changed how we read her songs. The minor-key moments are still her best: Only Girl (In the World) revives the chilly trance of Disturbia with a newly vigorous vocal performance,” wrote August Brown of the LA Times.

“Thankfully, she’s back on track with Loud, an 11-track set that is top-notch from its opener, the jamming fetish-revealer S&M to the closing number, the sequel to the riveting abuse tale Love the Way You Lie, where Eminem this time takes a back seat to Rihanna’s emotional roller coaster ride. And what’s in between is equally as fulfilling — or better,” wrote reviewer Mesfin Fekadu.

Check out Rihanna’s Only Girl (In The World) video below: