Prince William proposed to Kate Middleton with a familiar engagement ring: That of Princess Diana, his late mother. 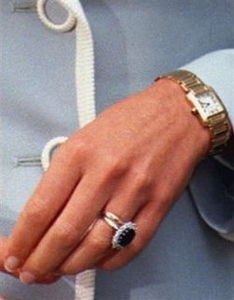 Kate Middleton’s engagement ring is certainly gorgeous, but it has extra-special meaning: It belonged to Prince William’s late mother, the much-adored Princess Diana.

“This was my way of making sure that my mother didn’t miss out on today,” William said as the couple posed for photographers.

Diana is said to have picked out the ring herself at the tender age of 19 from a selection presented on a tray from jeweler Garrard.

The British royal family has a tradition of using stones other than diamonds in their engagement rings, although diamonds certainly have been selected too. Queen Victoria and Wallis Simpson, Duchess of Cornwall, both wore emerald engagement rings, Princess Margaret and Sarah Ferguson wore rubies, and Princess Anne and the Queen Mother wore a sapphire, as well as Diana.

Kate Middleton’s engagement ring is a beautiful piece featuring a large oval sapphire surrounded by 14 diamonds, set in white gold. The couple is planning a 2011 wedding.