Mel Gibson said he only sort of hit his baby mama, but Oksana Grigorieva told Larry King she taped the altercation because she was in fear for her life. 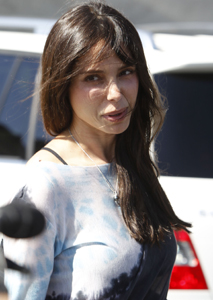 Oksana Grigorieva claims Mel Gibson beat her so badly he knocked her teeth out, but according to his deposition declaration, Gibson said he only slapped her to get her to snap out of her hysteria.

According to TMZ, in the June 23, 2010 declaration, Gibson said during an argument Oksana grabbed baby Lucia and yelled, “Stop yelling or you will make her into a retarded brain damaged idiot!”

He claims Oksana then “started swinging Lucia erratically in her arms, jerking her body from side to side to keep Lucia out of my reach.”

“I slapped Oksana one time with an open hand in an attempt to bring her back to reality. I did not slap her hard, I was just trying to shock her so that she would stop screaming, continuing shaking Lucia back and forth. I did not hit Oksana with a closed fist, as she alleges. I did not ever punch her in the face or in the temple or anywhere else, not then or at any other time.”

Gibson also admitted, “While I do not believe I handled the situation as well as I should have, I was worried about the rough way Oksana was shaking and tossing Lucia around. My hand never touched any part of Lucia.”

A dentist who examined Oksana the following day did not find any evidence of injury, although she claims Gibson broke two teeth.

Oksana, who will appear on Larry King against judge’s orders tomorrow night, said the whole reason she started taping the incident is because she was in fear for her life.

“I started taping it around 11 o’clock because I thought I’m actually not going to live through the night,” she told King. “I wanted my mother to be able to prove that if I’m dead that this is who did it.”

But Oksana at least says Mel’s drinking problem had nothing to do with that night. “There was no liquor, not once. He never drunk. I mean, one time he drunk when he was away. That’s the only time he drank. I’ve never ever seen him drinking.”

“That’s why I keep saying on those tapes, you need medication,” she continued. “He does need medication for the sake of our daughter. He needs to be treated.”

Gibson has been ordered to pay Oksana $20,000 a month in child support, plus housing costs.