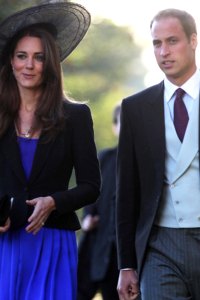 Prince William and Kate Middleton are engaged! Surprised? Probably not, but it’s nice to hear the news from the horse’s mouth — or in this case, a royal spokesman.

“The Prince of Wales is delighted to announce the engagement of Prince William to Miss Catherine Middleton. The wedding will take place in the Spring or Summer of 2011, in London. Further details about the wedding day will be announced in due course,” an official statement released on Tuesday said.

This wedding could turn out to be the most watched royal nuptials since the Prince Charles and Diana Spencer wedding back in 1981.

The statement went on to add, “Prince William and Miss Middleton became engaged in October during a private holiday in Kenya. Prince William has informed The Queen and other close members of his family.”

The Prince even sought out old school measures to ask for his bride’s hand in marriage. “Prince William has also sought the permission of Miss Middleton’s father,” the statement detailed.

That’s a lot of information coming from one important announcement, but we’ve been waiting for it for some time. So, where will the couple take up residence once they’ve become man and wife? Kate Middleton will follow her man as he continues the good fight. “Following the marriage, the couple will live in north Wales, where Prince William will continue to serve with the Royal Air Force,” the statement ended.

Allegedly, three years ago, the two made a secret pact to marry. “Kate wanted assurances from William,” Katie Nicholl, author of William and Harry: Behind the Palace Walls, told Us Weekly. “William told Kate she was The One, but he was not ready to get married. She agreed to wait for him.”

The official news has been broken, what now? Time for wedding watch! The spring or summer of 2011 is not that long in the wedding planning world.

What do you think of the royal engagement between Prince William and Kate Middleton?