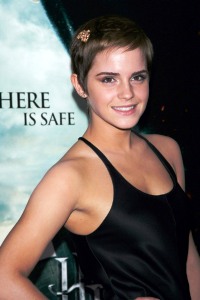 Sure, she could have a future as a style-setter, but Emma Watson is also an extremely talented actress. Her ever-building acting chops are on full display in the first part of the two-part Harry Potter finale, Harry Potter and the Deathly Hallows.

Watson discusses filming the final two movies with us as well as how the Harry Potter franchise has progressed over the years — a growth that mirrored her own growing maturity. Also, Emma admits why it was important for her to take a step back and be now solely known as Emma Watson, Brown University undergraduate.

SheKnows: Watching the Harry Potter franchise over the years, it is unbelievable watching the acting skills of you, Daniel Radcliffe and Rupert Grint, grow over the years. With Deathly Hallows having a 260-plus day shoot, how were you able to even further explore the nuances of your performance as Hermione?

Emma Watson: I just had such a bigger role. It gave me such a better chance to really develop it and get into it. I felt like I had so much more room to give it a bit more. I had some really challenging stuff to do, which gave me a chance to show what I can do — which was lovely as well.

SheKnows: Was the longer shoot nice to further explore your character as she sits at this vital moment in the Harry Potter story?

Emma Watson: It’s wonderful that on Potter, we had that kind of flexibility. Pretty much, such a huge part of the filming was done at Leavesden [Studios], so it wasn’t like, “Okay, guys, we won’t be at the set tomorrow. We have to get this done.” Those sets were not around, so we did not have the option to not get it right. That was a luxury I guess. 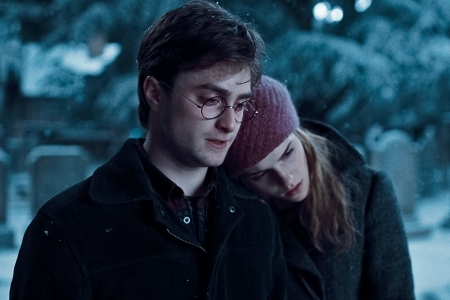 SheKnows: Did you feel freer on this film, maybe because the end is near?

Emma Watson: Definitely, and I just had such a bigger role. It gave me such a better chance to really develop it and get into it. I felt like I had so much more room to give it a bit more. I had some really challenging stuff to do, which gave me a chance to show what I can do, which was lovely as well.

SheKnows: Was it nice to get away from Hogwarts in some ways to explore your character and the others in a different, albeit dangerous, environment?

Emma Watson: It felt like we were making a different movie, which was so nice. It meant it didn’t get boring after making six of them. It’s nice to have something a bit fresh.

Watson revels in the Potter experience

SheKnows: Director David Yates has been at the Harry Potter helm since the fifth film. Has being able to develop an on-set shorthand for you as an actress a plus, or did you prefer the different director formula of previous films? 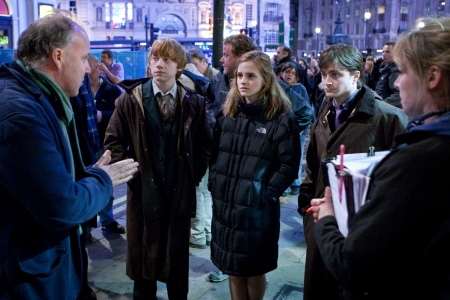 Emma Watson: [David Yates] was very good. He’s very calm, which is great for me, because there are days when I just panicked. I mean, really just, “David, I don’t know how to do this!” I didn’t know how to act. I’ve never been tortured before, I have no idea how to pull that off. I have no idea what it feels like to see your friend bleeding to death in your arms. There was some really hard stuff to do, like what it’s like to erase your parents’ memories and walk out the door. I think for me, I have quite an academic, like a heady approach I guess, to the way that I act, and us just talking through what it meant. What does it mean for her? How does it relate to her past? What does she think about this? Having the time to be very clear in my head allowed me to give a really good performance. David’s very patient, which is so nice. I never felt like I was being hurried. He’s very good like that, he’s very gentle.

SheKnows: Going back to the first director, Chris Columbus, and through David, how did each director bring something new to the art of acting for you? 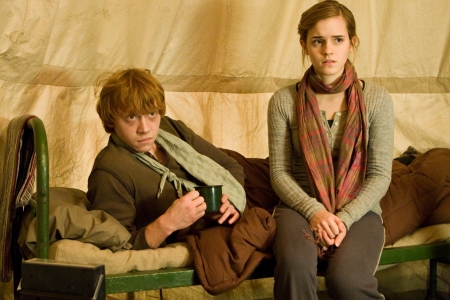 Emma Watson: Well, it’s interesting. I think working with different directors have signaled different things. Alfonso wasn’t going to do any of the “kiddie directing” stuff. He was like, “Get up there and do it.” He didn’t have much patience for — “Eyes wide, look terrified!” He wasn’t going to do any of that. He made us step up and then Mike Newell again, and then David Yates. It worked.

SheKnows: Of all the great British actors and actresses you’ve shared the screen with in all the Harry Potter films, is there one that particularly was resonant for you personally?

Emma Watson: A lot of them. I miss working with Emma Thompson, she was a real fave. She’s lovely and very interesting and I got on really well with her.

SheKnows: How do you keep it fresh portraying Hermione?

Emma Watson: That is definitely the hardest thing. The cool thing about this movie is that because we shot two back-to-back, there was this momentum that we picked up and there was this kind of chaos to flitting back and forth between two different movies. We were trying to get so much done that we didn’t have any option than to be fast and be on top of it. The pace picked up a notch, which really helped us as actors, because when it’s that slow, it’s very hard to give a fresh performance. When you’ve sat in the trailer for three hours, it’s tough. 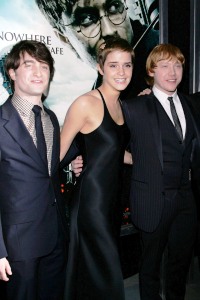 SheKnows: Have you been impressed with your co-stars over the last eight films?

Emma Watson: Oh, all the time, particularly in Part 2. There’s a scene where Rupert’s brother dies and the amazing thing about Rupert is that he’s a very self-contained human being. It’s very rare that you see him get emotional. The minute the camera rolls, he just becomes this other thing and he has so much. I’m like, “Where does that come from?” There’s a scene where he cries. I remember having to remind myself to keep acting because I just wanted to go, “You’re amazing! That was amazing!” I don’t know where he pulled it from and I’ve had moments exactly the same with Dan where I’ve just been amazed, particularly with a lot of the stunt work Dan’s had to do in the last movie. He’s fearless and he’ll just launch himself off buildings, all this stuff, and I’m just gobsmacked that he just gives it everything, and it’s really admirable, definitely.

SheKnows: There was a time that you might have walked away from the Harry Potter films. Now that you’re enrolled at Brown University, people are thinking you’ll walk away from acting. Clearly, that’s not true, but what is on your agenda for the future?

Emma Watson: I want to be a Renaissance woman. I want to be good at lots of different things. I thrive on variety. I just love doing things that are new. It’s really exhausting when people are like, “You’re giving up. It sounds like you’re never going to act again.” No, it’s not like that. I just really want to finish my education, and I’m just taking it slow, you know? I’m just not diving into anything. I’m just taking care of feeling out my options and making sure that whatever I do next is going to be the right thing. I just did a small movie called My Week with Marilyn, which is a Weinstein production with Eddie Redmayne, Michelle Williams. It was only a couple days shooting, but it went really well. So yeah, I’m just trying to find the right [things]. 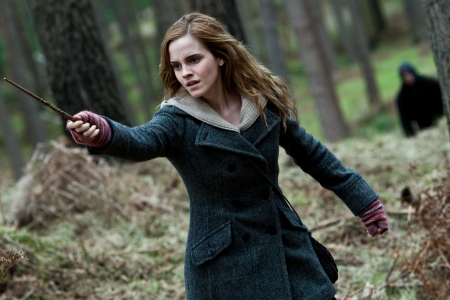 SheKnows: Your character is quite an inspiration for girls and having started acting very young, when did you become aware of that fact, has it affected you at all and how have you handled it?

Emma Watson: I have younger siblings. Not with Harry Potter, but with other movies that they watched, they watch them over and over and over again to the point where they will say the dialogue with the character in the movie. I was watching my little sister do this. I was like, “I wonder if kids do this with Harry Potter. I wonder if kids literally impersonate what I do.” And when I realized that, I realized this is a big deal. [Laughs] So yeah, I definitely had a moment where I realized that I am very fortunate to play her.

SheKnows: When you filmed the epilogue for Harry Potter and the Deathly Hallows Part 2, was it challenging filming wise, but also emotionally?

Emma Watson: Sure, that was definitely a challenge. There’s so many challenges in these last two. Pretending that I had kids and acting as if they were my children was the weirdest thing. That I had children — so weird. That was a struggle. I was like, “Am I doing this right? How do I…?” It was hard to know how to approach it. I hope it looks good in the end. Prosthetics are horrible [laughs]. I’m going to avoid doing a movie with prosthetics, like my life depends on it. I’m glad I had like a taste of that experience, enough to know it’s miserable. [Laughs] It was obvious for me.

SheKnows: Lastly, how have you adjusted to life without Harry Potter? 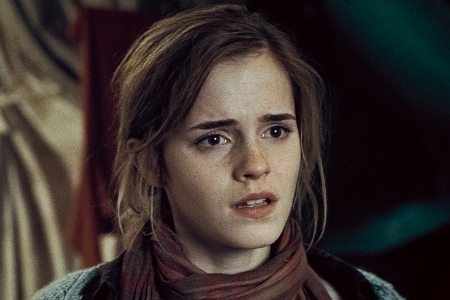 Emma Watson: I go through periods where it feels fine, easy, and I’m busy at school. [Then] there are days when I feel really lost. It was just so structured and I had people telling me where I needed to be, what they wanted me to do. My whole life was on a schedule, on a call sheet, every day. Being at university, you decide when you eat, where you go, if you work, if you don’t. No one cares and it’s all down to you. So yeah, I had days where I feel, “Oof,” but it was always going to be an adjustment. I feel lucky that I kept going with school and that I have that kind of infrastructure to fall back on. I don’t know. It feels nice to be able to take a bit of a break. I don’t know how Dan’s doing it, to be honest, because making these two films back to back was exhausting, I mean, really exhausting. I was hanging in rags when we finished shooting. I don’t know how Dan is doing it. He’s kind of amazingly energetic.