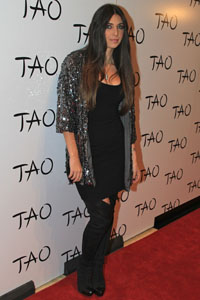 Record-holding Olympic champion Michael Phelps was spotted at The Grove in LA with Brittny Gastineau by an alert TMZ photog. Immediately, the blogosphrere wondered: Is the pair dating?

Here’s what went down: TMZ cameras caught Brittny and Phelps gulping coffee on the street. As soon as the pair spotted the camera they took off in opposite directions. The camera followed Brittny until she hopped in a large SUV that appeared to be driven by Phelps, who must have hopped in during the ensuing 30-ish seconds.

Brittny and Phelps were also spied getting cozy at the Mondrian the night before. A source says it’s true: They are a couple.

“It’s new but Brittny really likes him,” says our source. “They really are dating.”

Brittny recently appeared with her mom on the E! reality series Gastineau Girls. And Phelps, after winning 16 Olympic medals and getting caught with a bong in his mouth, the Olympic superstar was romantically tied to mom-to-be, hypocritical so-called Christian mouthpiece and former Miss California USA, Carrie Prejean.