Scarlett Johannson has been named GQ‘s Babe of the Year, an accomplishment second only to her Tony Award! 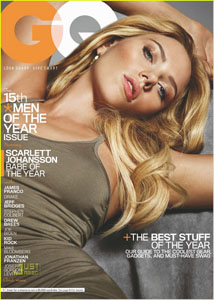 Scarlett Johansson has had a banner year. First she won a Tony Award for Best Performance by a Featured Actress in a Play for her role in A View From a Bridge. Now she has been named GQ‘s Babe of the Year and graces the cover of the magazine’s November issue pouting provocatively for the camera.

Scarlett told GQ that when it comes to her work, she loves the act of creation. “It’s sort of like asking someone what feels good about playing an instrument. It just satisfies some part of you,” Johannson said.

“There’s this indescribable thing that happens when you know that something’s working, a sense of the timing and everything coming together,” Johannson added. “Also there is the problem-solving part of it that’s interesting. I like taking apart something and trying to figure out what will make this interesting to watch. What’s going to make this… delicious.”

Speaking of delicious, Scarlett’s husband is fellow actor Ryan Reynolds. The couple wed in September 2008 after a short four-month engagement in a private Canadian ceremony. She was most recently seen on the big screen in Iron Man 2.