Oprah invited the cast of her Academy Award-nominated film The Color Purple to sit down and chat with her. Oprah addressed an imaginary beef between herself and Whoopi Goldberg.

Oprah sat down with the cast of The Color Purple and addressed a feud between herself and Whoopi Goldberg that never actually took place. 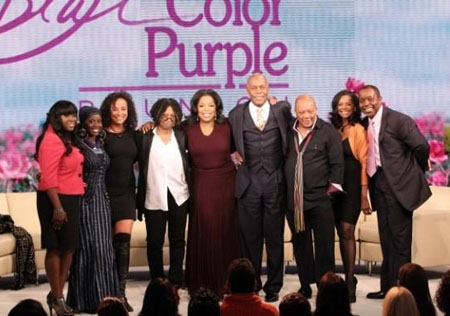 The only time the public caught wind of the so-called feud was when Kitty Kelley briefly addressed it in her unauthorized biography of Oprah Winfrey. Turns out Kelley’s revelation was half-true: Oprah and Whoopi weren’t exactly fighting, but due to a miscommunication each thought the other was angry at her.

A tearful Oprah told her audience the story of how the two finally cleared the air. “Whoopi came up to me and she said, ‘Can I just ask you something?'” Oprah recalled. “‘Did I do something to you?’ And I said, ‘What are you talking about?’ She says, ‘All these years, you know, we’ve been disconnected and I just want to know, did I do something?’ I said, ‘All these years I thought you were mad at me.'”

The pair has since put the rift behind them.

Joining Whoopi on stage was the entire main cast, including Danny Glover, who had only been in three movies prior to The Color Purple. Goldberg had never appeared in a film before and was terrified to take the job. “I never made a movie before,” she said. “I didn’t know how this thing worked, and if I messed it up, I didn’t want to get in trouble.”

Read on for more oprah winfrey