Emotions ran high during the semifinals of Dancing With the Stars as Jennifer Grey, Brandy, Kyle Massey and Bristol Palin fought for a spot in the finals.

After eight eliminations and countless routines, the final four of Dancing With the Stars raised the bar during last night’s semifinals. With the remaining contestants dancing a new Latin and ballroom dance — with showcasing solos — the stakes were high and the tension higher as Jennifer Grey capitalized on perfect scores and Bristol Palin found her inner dance diva. 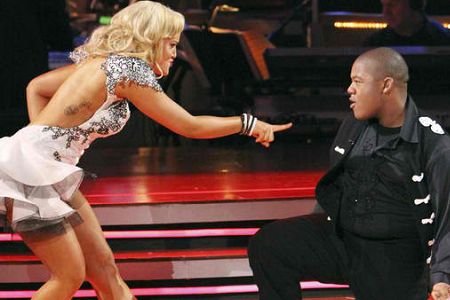 Every one of the competitors brought their A-game during the Dancing With the Stars semifinals, making this possibly the toughest race to the finals in DWTS history.

Brandy and Maks went for a bold paso doble for their first dance of the semifinals. The dancing duo channeled past frustrations into an energy-charged routine the judges found spot on, but anyone watching could tell there was something different compared to their other dances. It looked like Brandy’s emotions ran a little too high and she put too much anger into the dance with the judges giving her a 27.

During the ballroom round, Brandy’s Argentine tango had everything she’s known for — strong holds, passion and storytelling. This was the Brandy we had hoped to see in the Latin round as she got the perfect 30 she deserved for her tango.

Finally, a DWTS episode that didn’t focus on Jennifer Grey’s injuries — at least for the first part of the night anyway. Her Latin cha cha would have done Shakira’s hips proud. There was nothing boring about this perfectly executed dance — so perfect, in fact, Jennifer Grey earned a perfect score.

She claimed a perfect score for her first round cha cha and again during her ballroom waltz that turned on the charm and grace, proving she belonged in the semifinals. It was such a pretty waltz, it’s hard to imagine a finals without Jennifer Grey. It’s still going to be tough given her past episodes and all the focus on her injuries.

Bristol Palin has arrived, ladies and gentlemen. For their Latin dance, Bristol Palin and Mark Ballas danced a paso doble to Britney Spears’ Gimme More that had us saying, “Gimme more Bristol.” This was not the Bristol Palin from episodes past. She was confident, sexy, and most importantly, technically good. Carrie Ann Inaba even gave Palin some love with a sisterly hug at the end. The couple earned their highest marks to date with 27 points.

Bristol Palin really came out with fire on her paso doble. With her waltz, she used a quiet fire to prove her point. The judges had mixed reviews from dropping character to beautiful movement but she really did give it her all. She had drama and elegance that deserved more than a 26.

As Len Goodman put it, Kyle Massey had “more bounce to the ounce” when it came to his samba. The pure entertainer gyrated and pelvic thrust his way to a 29. He’s no longer just goofing around. Kyle Massey means business — dance business.

The little firecracker known as Kyle Massey took his 29 from the first round and raised the stakes with a Bollywood-infused Argentine tango that was hot. Who would have ever thought we’d be saying the words hot and Kyle Massey in the same sentence? Well, we are and he is. Carrie Ann Inaba is even deeming Kyle Massey the Emmitt Smith of season 11. That’s why he got a 29 for the Latin round.

Check out the live results show Tuesday night to see if your favorite earned a spot in the Dancing With the Stars finale. Annie Lennox is scheduled to perform as another dancer learns their fate.