The premiere of Sarah Palin’s Alaska broke TLC ratings records, becoming the network’s top debut since What Not To Wear. 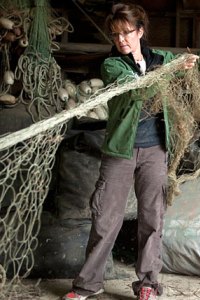 Sarah Palin and John McCain may not have banked enough votes to become Vice President and President of the United States, but Palin proved she’s got what it takes to lure in TV viewers.

Almost five million Americans tuned in to check out the November 14 premiere of her new eight-part series Sarah Palin’s Alaska, according to TLC. The majority of those folks were 35 years of age and older, according to Nielsen reports.

For those who were busy watching football or Desperate Housewives last night, Sarah Palin’s Alaska is a reality show-travel documentary hybrid set in America’s “final frontier.” Palin and her family show off their home, Alaska’s great wilderness and locales of interest.

During Mama Grizzly, the one-hour premiere of the eight-week television event, viewers caught a glimpse of Palin baking cupcakes with nine-year-old Piper, working on her back porch, getting ready for her Fox News gig in her at-home TV studio and talking taxes with Todd.

Palin and Todd also chatter about Joe McGinniss, the unauthorized Palin biographer who moved in next door to them. This aside gave Palin a chance to reference how our country needs a big wall to keep unwanted folks out.

Meanwhile, Palin’s 16-year-old daughter Willow tried to sneak a boy up to her room, but Mama Palin put the kibosh on that action right quick.

There were also two Alaskan adventures, including a big family RV trip to Denali National Park and what is quickly becoming a controversial fishing expedition.

The Alaska Wildlife Alliance is up in arms over the Palin clan’s chosen fishing spot, which was in view of protected brown bears. Word is the family violated the 30-foot rule set by the Alaska Department of Fish and Game.

Palin, however, is used to getting slammed, so she’s likely to focus on her big win for TLC.

What’s more, she’s gotten another bit of good news: A word she took slack for making up last year has been officially accepted by the New Oxford American Dictionary. “Refudiate” was tapped as 2010’s Word of the Year, beating out “gleek” and “retweet.”

Sarah Palin’s Alaska airs Sundays at 9 on TLC, with an episode called Just for the Halibut up next.