Super-successful country duo Sugarland has reached a deal in a lawsuit filed by former member Kristen Hall. Hall, a singer and songwriter, filed the $14 million dollar lawsuit in 2008 against Jennifer Nettles and Kristian Bush. 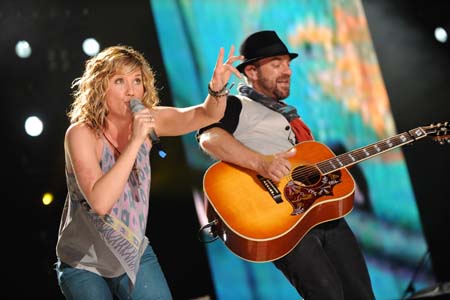 Hall left Sugarland in 2005 after only one Sugarland album to pursue a solo career. However, her lawsuit claims that she was entitled to one-third of the group’s profits for being an instrumental part in Sugarland’s 2004 debut album Twice the Speed of Life. She also said that she formed the band in 2002 and bankrolled much of the group’s debut album on her credit cards. Nettles and Bush argued against that claim, saying that Hall’s departure left them with over $100,000 in debt.

U.S. District judge Timothy Batten signed an order Friday declaring the lawsuit settled, though terms were not publicly disclosed. Both sides have until Dec. 13 to complete the settled agreement.

It’s not likely that even a $14 million dollar settlement would have much impact on the popular country duo. Their fourth studio album, The Incredible Machine, debuted on top of Billboard’s Top 200 and Top Country albums charts after selling 203,000 copies in the first week after its Oct. 19, 2010 release. They’re also riding high off their fourth-consecutive win of Vocal Duo of the Year at last week’s CMA Awards.

We hope Hall’s settlement is enough to make her forget what a mistake it was leaving the group she founded!