Fresh off their successful London premiere, the cast of Harry Potter and the Deathly Hallows is gearing up for the New York City premiere tonight. You can watch the live stream of the premiere right here on SheKnows! 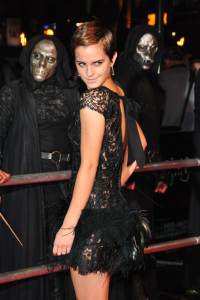 The New York City premiere of Harry Potter and the Deathly Hallows: Part 1 will take place at Lincoln Square starting at 3pm/PT or 6pm/EST. Watch the event right here as cameras chat with the stars of the hit movie, including Emma Watson, Daniel Radcliffe, Rupert Grint, Ralph Fiennes and Tom Felton.

Emma Watson arrived at New York City’s JFK airport yesterday for the NYC premiere of Harry Potter and the Deathly Hallows: Part 1. The stylish star is expected to walk the red carpet with Daniel Radcliffe and Rupert Grint.

Watson dazzled crowds at the London premiere in her $5,000 short and sassy Rafael Lopez black lace dress with feathered trim. No word yet what she will wear tonight, but stay tuned right here to be the first to know!

Watson enjoyed her role in this movie and is excited for fans to see it. “I just had such a bigger role it gave me a better chance to develop it and get into it. I felt like I had so much more room,” Watson told reporters. “It felt like we were making a different movie, which is nice. It didn’t feel like it was boring after making six of them. It was nice to have something a bit fresh.”

Harry Potter and the Deathly Hallows: Part 1 is out on November 19, while Part 2 is slated for next year.

read on for More Harry Potter