Remember when the stars of Harry Potter were just wee tykes?

It was all before everyone saw Daniel Radcliffe’s very private magic wand on Broadway, Rupert Grint grew a ginger beard or Emma Watson turned into mini Mia Farrow. 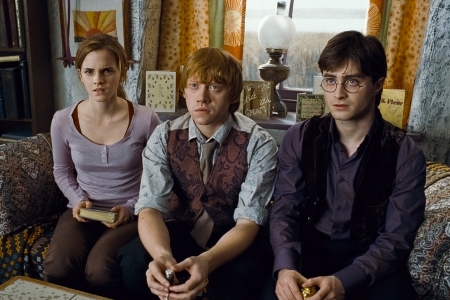 The second and final chapter, not in theaters until July 15, 2011, features the mother of all cinematic pay-offs for Potter fans — the highly anticipated showdown between Harry (Daniel Radcliffe) and his arch nemesis, Lord Voldemort (Ralph Fiennes), in the Forbidden Forest. But we’re not there yet, Hogwarts fans.

In order to reach what will be a very drawn-out and emotional conclusion (though not drawn out enough for many fans who can’t bear to see the films come to an end), we have to get through Part 1, not lose our minds at an inevitable huge cliff-hanger, and then count the minutes until Part 2 opens in July.

Harry Potter and the Deathly Hallows Part 1, which some are calling a Harry Potter road movie, begins with Harry (Radcliffe), Ron (Grint) and Hermione (Watson) setting out to track down the Horcruxes, the secret to Voldemort’s immortality. Their destruction is the only way Voldemort can be destroyed, but as dark forces begin to take over and they are hunted by Voldemort’s Death Eaters, “The Boy Who Lived” uncovers the old, almost forgotten legend of the Deathly Hallows, which could give the evil Lord the unending power he seeks.

Get ready for the Battle of Hogwarts and for a long, tear-stained farewell to Harry Potter.