Jessica Simpson and Eric Johnson are engaged! The couple seems happy, but they have only been dating six months causing some to speculate they are moving too fast. What do we really know about Eric Johnson? 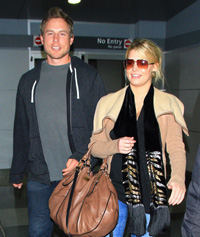 Jessica Simpson has famously been unlucky in love — until now. Eric Johnson came out of nowhere, swooped the 31-year-old singer off of her feet and promptly proposed to her. What do we really know about Eric Johnson? And does the father of Jessica Simpson, Joe Simpson, approve?

Eric Johnson, 31, came out of Yale University to be drafted by the San Francisco 49ers in 2001. He later played for the New Orleans Saints before becoming a free agent in 2008.

In his personal life, Johnson got married in 2004 and separated from his stylist wife in 2009, with the divorce becoming final in September of this year. If you are doing the math, you will know that he was separated, but not divorced, from his wife when he and Jess started dating.

He was reportedly planning on attending a business school in Pennsylvania, but decided against it once he and Jessica Simpson got together. Some insiders speculate that Johnson is using Jessica for her lifestyle.

Is he using Jess?

“[He] was never that successful in the NFL, but he’s always wanted the celebrity lifestyle,” the insider revealed to Us Magazine. “I believe that Jessica is his way to get famous. He’s using her.”

Another source reports that, “Eric doesn’t have a job, he just follows her around. Her friends do not trust him.”

What does Joe Simpson think?

Jessica Simpson insists that she’s “never really been in such a healthy relationship” and says that Johnson “has been an inspiration. He really knows himself.”

Jessica’s father, who is known to be protective over his daughter, appears pleased with the engagement, tweeting: “So very happy for Jess and Eric. May they have a lifetime of joy and happiness.”

Sources are saying that Jessica Simpson and Eric Johnson are getting married without a prenup! Considering the fact that Jessica is worth around $100 million, some say she is taking a huge risk.

What do you think? Is Eric a good guy — or is he taking advantage of Jessica?