It’s time for the semifinals on Dancing With the Stars and it’s anybody’s game in the race for the mirrorball trophy. 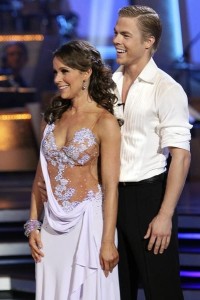 And then there were four. As the final four get set to compete in the semifinals of Dancing With the Stars tonight, they’ll be faced with channeling their grace and sex appeal. The couples will perform one ballroom dance and one Latin dance in hopes of moving on to the final three.

SheKnows took a moment to break down the remaining couples consisting of stars Jennifer Grey, Brandy, Kyle Massey and Bristol Palin, giving our pick for the final three.

With season 11 being as unpredictable as ever — the elimination of Audrina Patridge and the nine lives of Bristol Palin — who will move on from the semifinals to compete in the finals of Dancing With the Stars?

If you strip away Jennifer Grey’s injuries and how much they have been documented by the show, she really does have the dancing abilities to be called a Dancing With the Stars champion. Jennifer Grey and Derek Hough produced the first perfect score of the season with their instant dance last week, but message boards have been lighting up over the fact that the show has been shoving her ailments down the viewers’ throats. Even Hough spoke out recently, saying Grey’s issues were overshadowing her abilities.

If Jennifer Grey can keep her focus in check and not let herself get in the way, we think she could go all the way — could being the operative word here. Her grace during the ballroom dance will most likely shine through, but her Latin dance could go either way — just think back to her paso doble gone wrong.

Brandy and Maks have the win-factor on their side. If we look purely at the scores, they’ve topped or tied the leader board the last four weeks. Brandy’s emotions could get the better of them, however. She pushes herself so hard and wants the Dancing With the Stars mirrorball trophy so badly, she might psych herself out.

The edge this couple has is Maks Chmerkovskiy. Maks stands up to the judges and viewers love a bad boy protecting his partner. It’s no secret they’ve fought for every mark they’ve received this season, and their story alone could pull them through. Brandy is a double threat as she’s been successful in both the elegant and saucy elements. Look for her to secure a spot in the final three.

Kyle Massey has gone from a boy to a man on the Dancing With the Stars ballroom floor and he deserves to be in the final four. Does he deserve a spot to compete in the final three? Signs show yes. Each week, Massey has taken everything the judges have said and applied it — good and bad. For a teenager, he has transformed into characters feeling emotions he’s probably never felt. Kyle Massey may not have the cleanest technical ability, but what he does have is a no excuses attitude and that’s what makes him fun. He will most likely get voted into the finals based on pure wow-power. 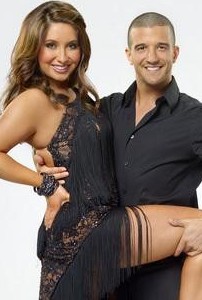 Bristol Palin wants everyone to understand it’s not politics carrying her through; it’s a simple fan base. Bristol Palin is the Kelly Osbourne of season 11. She can look beautiful and elegant when she’s not battling her own embarrassment and self-confidence. Her ace in the hole is Mark Ballas. Mark Ballas is a skilled dancer who has the patience and drive to stick it out with Palin. If he can produce top-notch choreography and use her strengths, they could skate by. The thorn in this couple’s side is the Latin round. Palin has to channel her sexy, which was difficult the first time around. We think she’ll make it to the finals by a narrow margin.

Factoring in what we know up to this point, our pick for the finals of Dancing With the Stars will be Brandy and Maks, Kyle Massey and Lacey Schwimmer and Bristol Palin and Mark Ballas.

Why leave Jennifer Grey and Derek Hough out of the running? It’s simple. The finals usually feature a high-scoring team (Brandy and Maks), a feel-good duo with moderate technical ability (Kyle and Lacey) and an underdog (Bristol and Mark). With two top-scoring teams in the semifinals one will probably head home during the results show. Unfortunately, the public might be tired of Grey’s story and the wildcard votes from the former favorite, Kurt Warner, could jump over to the Brandy train. We can’t forget where the votes from the previous week’s cast-off go.

Now, don’t run out and place any money on this theory, it’s just a hunch in pure fun. Besides, the semifinals could surprise everyone and change the picks.

Check out the Dancing With the Stars semifinals tonight, November 15, on ABC. Watch the live results show November 16 and see if our picks for the finals were spot on.