Brooke Burke is a busy mom, what with hosting Dancing With the Stars, writing her first book that is due in stores in February, planning her wedding to fiance David Charvet, raising her children and serving as spokesperson for Ubisoft’s new fitness game, Your Shape Fitness Evolved. You can imagine our joy she was able to take the time to talk to us exclusively. 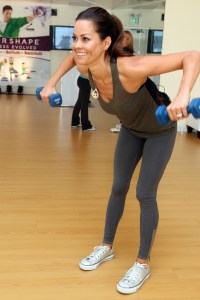 Burke is currently enjoying Dancing With the Stars’ highest-rated season yet, but on this day, SheKnows caught up with her while demonstrating the exciting new fitness video game that promises to make working out easier on busy moms — just like Burke — while not sacrificing exercise effectiveness, at the Up Dog Yoga and Cycling center in Los Angeles.

SheKnows: Tell me about the fitness program you’ve endorsed and why out of all the fitness programs, you attached your name to this particular game?
Brooke Burke: I’m really fascinated by the technology and how it works with the Xbox360. I think it is so revolutionary and I’m so fascinated by it. You know, it’s interesting that you don’t have to hold handles like the Wii, you don’t have to have tools anymore — you don’t even have to use a controller. Everything is pretty much virtual, but also, the game’s camera puts you into the game.

SheKnows: I saw that, it’s crazy, like your workout clothes and everything!

Brooke Burke: Yeah, you’re watching yourself on the screen with a trainer. It’s really, really cool! It’s different and it’s revolutionary. Also, I love to be able to workout at home because I’m so busy. I think this is something that’s going to surprise people and there are so many great options as well.

SheKnows: What do you think these fitness games have specifically done for working moms like yourself to get in that workout that’s so important?

Brooke Burke: I know well that, unfortunately, your workout is usually the first thing that goes, right? Honestly, just cutting out the driving time is nice by being able to workout at home. I wish I could go to the gym, but realistically I’d spend another two hours of my day with a workout. You can do it at home in your living room and with a game like this; you can have a celebrity trainer where normally you can’t afford one. Now you can have one in the privacy of your own living room. You can get your workout done and design it in whatever time frame that you have available. Whenever you’re ready, it’s ready for you. I think it’s much easier to commit and to accomplish your fitness goals. You can also enter in a profile so it tracks your progress and your improvement. Also, you can get online and share stats with other people — that can be motivating for a lot of women! 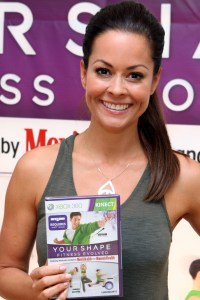 SheKnows: I know they say that doing one particular workout over time doesn’t do as much for you as various different workouts, how does the game vary the regimen?

Brooke Burke: It’s true, I think people get bored and people get into a rut and then they’re less motivated to continue working out. I like to mix-up my workouts too. I love the kick boxing, that’s one of my favorite ones. There’s yoga, you can even do a class with this game. You could do a one-on-one workout with a trainer where you can incorporate hand weights. You can make your workout harder when you’re ready to, doing things to increase that. It’s nice if you have the option on all those varieties. You can choose different workouts all the time as you master one and move on to another.

SheKnows: It’s kind of incredible the technology that’s come into the household…

Brooke Burke: It’s blown me away. It’s very futuristic, almost Star Trek-like, “Beam me up, Scottie.” That’s what I keep saying [laughs] when I look at myself in the game! You are actually in the game and it does a scan of your body — even your clothes, your face — everything is there. It’s unbelievable.

SheKnows: I would think that as a mom, it is also important to have your kids seeing you workout, which you don’t get if you go to a gym. It’s your chance to be a fitness role model. 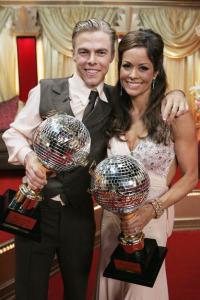 Brooke Burke: That’s a great point! Health and fitness is really, really an important issue for sure in my household. I do a lot of things outdoors with my kids. I also monitor the amount of video games that they play, but I’m all for it with this game because this is an opportunity to do a routine and to workout when I’m at home. They see the commitment that I make to myself to take care of myself. Actually, they can join in on a game like this as well which makes it really fun! There are some games that are a little bit more fun than your straight fitness. There’s some hula hooping options, things like that that the kids can do as well.

SheKnows: Would you recommend the game to your Dancing With the Stars co-stars?

Brooke Burke: Absolutely, I would recommend this game to anyone who’s busy. I would recommend it to anybody who just has a goal for their own motivation, who wants to do something different. I think people who aren’t avid fitness people; the curiosity factor that this new technology brings is going to spark a lot of interest. But, as far as Dancing With the Stars goes, some of them are in the best shape of their life before they finish. 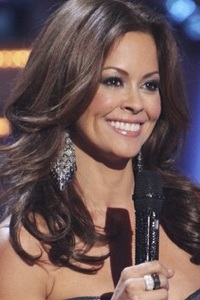 SheKnows: You’re on your second season of Dancing With the Stars now, how have you found the experience of the second season versus the first? You’ve always seemed incredibly comfortable this year.

Brooke Burke: Oh, thank you. It’s always more comfortable to return to a place you’ve already been. The first season was exciting — a lot of fun for me too because I know what it’s like to have been there and have ups and downs. I have a lot of compassion for all the dancers and what they’re going through. I know it’s a glamorous gig, but returning to this year’s show, it’s definitely more comfortable and more relaxing. Production is always mixing it up to keep the show exciting, but it’s a great family over there and so much fun to work on, and I enjoy watching the dancers just like everybody at home does.

SheKnows: Also you’re in a unique position backstage as an interview person. I’m just curious if you get to know these people and is it ever hard when the celebrities get sent home?

Brooke Burke: It is difficult. Eliminations are always tough. They’re very emotional for the cast and for myself because I spend those very vulnerable real moments back in the skybox with them — when they’ve just either been praised or they’ve been bashed, they’ve succeeded or failed. I also feel like I’m somewhat of a support system because they come to me for advice, knowing that I’ve been in their shoes and won the show. It’s really hard to say goodbye, especially when we have a surprising elimination like we did recently. Nobody thought Audrina Patridge would be going home. Audrina and Jennifer in the bottom two was like, wow, are you kidding! It just goes to show viewers that they really need to vote because sometimes you watch the show and don’t participate — the public has the power to dictate those results.

SheKnows: As somebody who has won Dancing With the Stars, what is it that you think DWTS has done to raise the discussion about dance?

Brooke Burke: I think there are a lot of positive messages for me. What I learned most from my experience dancing was just having faith in yourself and doing something that scares you. I think it is a really important step to take in life and to try new things that are different. Also, to think that my daughter is watching me go through the experience meant the world to me. She really fell in love with dance and is in dance class now because of that. I love the message that that sends to young girls and women. 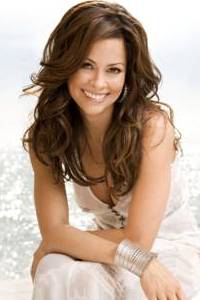 SheKnows: Absolutely. And I understand congratulations are in order as you were just named host of Miss America!

Brooke Burke: Thank you! That just came out. I’m very excited. I’ve been watching Miss America with my mom since I was a little girl. My mom’s been watching with her mom. My mom is actually more excited about this than me hosting Dancing With the Stars. It’s very sweet. There’s a lot of history there. It’s an honor to be asked to co-host Miss America.

SheKnows: What is your secret to effective TV hosting?

Brooke Burke: I love hosting live television. Compassion goes a long way as a host. I love to watch other hosts in action when I really feel like they care.