Ne-Yo is warming up his pipes in preparation for a whole new kind of song — a lullaby, as Ne-Yo has welcomed a baby girl! 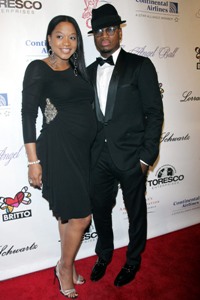 Ne-Yo is slated to deliver a hot new album later this month, but his girlfriend Monyetta Shaw had another special delivery on her mind when she gave birth to the couple’s new bundle of joy, Madilyn Grace Smith.

According to People, Ne-Yo and Monyetta Shaw welcomed their daughter Madilyn Grace Smith on November 12. Baby Madilyn’s appearance came as quite a shock to the couple as Shaw wasn’t scheduled to deliver until January. Madilyn had other plans for the new parents, however.

“I’ve been in love before but this feels like nothing I’ve ever felt,” Ne-Yo said. The singer, whose real name is Shaffer Chimere Smith, added, “Like I’m in love for the first time.”

Monyetta Shaw went into early labor November 12 while Ne-Yo was overseeing a charity function for his foundation. Don’t worry, the brand new father made it to the blessed event right on time to see his baby girl’s birth.

In between diaper duty and cooing at Madilyn Grace, Ne-Yo will be awaiting the release of his new album, Libra Scale, set to drop on November 22.