Jessica Simpson is engaged to boyfriend Eric Johnson. The timing of Simpson’s engagement to Johnson is curious given the very recent news of ex-husband Nick Lachey’s engagement to Vanessa Minnillo. 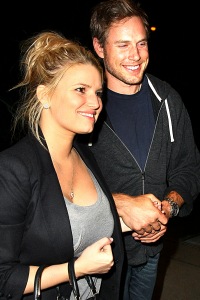 Sources are telling UsMagazine.com that Jessica Simpson is heading down the aisle — again. The 30-year-old singer’s boyfriend, Eric Johnson, reportedly put a ring on it November 11, just days after news leaked that her ex-husband Nick Lachey became engaged to his longtime girlfriend, Vanessa Minnillo.

Jessica Simpson was seen with the dazzling rock while making an appearance at Dillard’s at the Oak Park Mall in Kansas City.

News of a Jessica Simpson and Eric Johnson coupling began circulating in May while the former football player was separated from his wife, Keri Johnson. Those closest to Simpson were originally worried about Johnson’s motives.

Looks like everything turned out fine after his divorce became final October 7. No word on when the couple of less than a year will exchange vows, but a rep for Simpson did release the following statement to Access Hollywood: “Yes, I am excited to confirm that they are engaged!”

With two separate weddings to plan for the once-married couple, Jessica Simpson and Nick Lachey, the race to the altar will be closely watched. Simpson and Lachey were married for three years before the couple divorced in 2005. Many believed it was the stress of young marriage and the spotlight of their reality show Newlyweds: Nick and Jessica that contributed to their downfall, but either way, they both seem happy at this very moment.

After rumors began circulating that Simpson was freaking out over Lachey’s engagement, she took to Ryan Seacrest’s morning show to officially congratulate them. “I am extremely, extremely happy for him,” she told Seacrest. “Our relationship was over a really long time ago, and it would be nice if everyone could move on with us and really just celebrate the love between him and Vanessa [Minnillo].”

Both Simpson and Lachey deserve to be separately happy in their lives and both engagements are exciting. We just can’t wait to see who dons the better wedding dress. Who do you think will shine brighter on their wedding day — Jessica Simpson or Vanessa Minnillo? They both have great style, so this one will be tough to call.