Jessica Simpson is happy for her ex-husband Nick Lachey and his new fiancée Vanessa Minnillo. 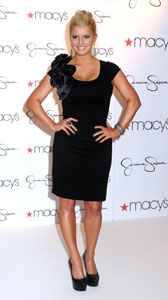 Despite reports that Jessica Simpson is comforting herself with solo pie eating contests, she insists she couldn’t be happier about the engagement between her ex-husband Nick Lachey and his longtime girlfriend Vanessa Minnillo.

A so-called friend of Simpson’s had told Popeater that Jessica was beside herself over the news. “Nick was the love of her life then, man, and he was her first, so she will always have a very special place in her heart for him. She’s deeply saddened,” the source claimed.

But Jessica Simpson says nothing could be further from the truth. She told Ryan Seacrest, “I don’t know where all those rumors came from. My mom actually called me and said that everyone was saying that I was ‘saddened.’ I was just in complete shock. I couldn’t be more happy for Nick.”

“Our relationship was over a really long time ago, and it would be nice if everyone could move on with us and really just celebrate the love between him and Vanessa,” she said. “I do, and I wish them nothing but the best.”

Of course, it doesn’t hurt that Jessica has Eric Johnson to keep her warm.