The Vampire Diaries left us with a blood draining cliffhanger this week. New vampires were revealed, a warlock came to town, and Katherine traveled to the past.

In the last few episodes of The Vampire Diaries, Katherine (Nina Dobrev) was sealed in the tomb, a werewolf was killed while another was born — Tyler  — and Elena (also Nina Dobrev) was kidnapped by a 500-year-old vampire named Elijah. Oh, and did we mention that the sacrifice of Elena, the human doppelganger, is the biggest key to breaking the sun and the moon curse? Mystic Falls has been one busy town. 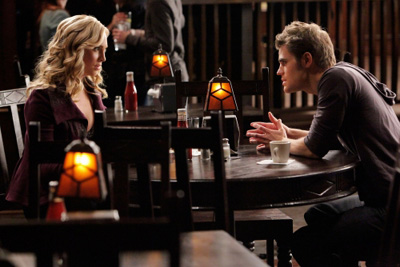 This week, in the episode of The Vampire Diaries entitled Katerina, Elena dug into Katherine’s past for questions she might not have wanted to find the answers to.

Elena Looks to Katherine For Answers

This week’s episode opens with a flashback of Katherine giving birth in 1492 and her child being given away.

We’re immediately taken back to present day, with Elena fuming over the knowledge that Klaus, the oldest and most dangerous vampire ever — literally — is after her. With Caroline’s (Candice Accola) help in distracting Stefan (Paul Wesley), Elena goes to Katherine for answers as to how and why Klaus is coming for her. After Elena bribes Katherine with a fresh cup of blood for survival, we find out that Kat originated from Bulgaria, but was banished to England after her child was born out of wedlock. Katherine’s bloodline didn’t end with her own life. In England, Katherine and Klaus first meet.

In his own separate plot to save Elena, Damon (Ian Somerhalder) convinces Rose to help him track down Klaus. Their little road trip introduces us to Slater, a vampire who has more degrees than he knows what to do with. He informs the duo that to track down Klaus one would do something as simple as using Craigslist. Craigslist, really? The coolest thing about Slater is that the shop he runs is built with protective windows to keep the sun out and let vampires come in during the day. This is how Rose is able to visit him.

Katherine continues to roll out her past and shed more light on the doppelganger mystery. Turns out the sun and moon curse of the vampires and werewolves was made with Petrova blood from Katherine’s family line and the doppelgangers were “created” to lift the curse — hence Klaus’ need to sacrifice a doppelganger which was Katherine back in the day when she was human. Once she learned this information and Klaus’ intent to sacrifice her, Katherine took the moonstone before he could kill her. She then tricked Trevor and Rose into turning her into a vampire so she wouldn’t have to die — and that’s how she became the fanged creature she is today.

Warlocks And The Return of Elijah

While Elena bonds with Katherine, Bonnie runs into new student Luka and his dad at the Grill. Luka’s dad questions Bonnie about her relatives in Salem. This does not sit well with Bonnie. Jeremy rescues her and the two excuse themselves.

On the other side of the Grill, Caroline has distracted Stefan by telling him she told Tyler she was a vampire. Stefan knows something is up. Caroline won’t give up the goods on where Elena is after Stefan begs her.

While Damon and Rose are chatting with Slater about the curse and how to break it, Elijah shows up from the dead. He’s standing outside the building and shatters the glass protecting the vampires who don’t have sun rings. Damon gets Rose to safety and Slater’s fate is unknown.

Katherine reveals yet one more secret and perhaps the most devastating piece to the puzzle. In addition to the blood of the Petrova doppelganger, the curse calls for a werewolf, a witch and a vampire. Putting it all together that means Tyler, Bonnie and Caroline. Everyone Elena loves is in danger from Klaus and that’s why Elena came back to town, to hand everyone over so she can stop running. At least that’s what we think.

Damon is genuinely feeling helpless in the fight to help Elena. Rose suggests he turn his emotions off for survival’s sake and he suggests she do the same in regards to her dead friend Trevor. The two get hot and heavy on the floor.

Stefan finds Elena in the tomb and begs her not to believe Katherine or her lies but Elena is convinced it all makes sense. They leave Katherine and Elena breaks down in Stefan’s arms once they’re at her house.

Bonnie learns Luka is a warlock and the two bond while a left out Jeremy looks on. But this new friendship might not be what it seems.

In two of the biggest cliffhangers of the night, Slater calls Rose to tell her the curse can be broken but he only knows of two ingredients to do it — a witch and the moonstone. After he hangs up, Elijah, who has compelled him to call Rose, forces Slater to drive a stake into his own heart.

This leads to the massive reveal that Elijah isn’t working alone in Mystic Falls. Luka’s father comes out of the shadows and the two conspire.

With Katerina being the last episode of The Vampire Diaries before it returns December 2, it left us wanting more. With that kind of cliffhanger left dangling in the balance, three weeks is too long!

What did you think of Katerina? Was Slater too vampalicious to die? Do you feel a Lexie rebirth on the horizon? Tell us, we want to know.