Marie Osmond opens up to Oprah about the tragic suicide of her son, Michael, in February. 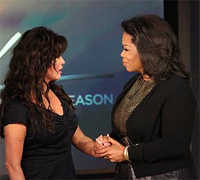 Airing today on Oprah, Marie Osmond reveals that, despite the rumors, her son did not commit suicide because he was gay.

“My son was not gay,” Osmond says. “He wanted to be married and have a family and travel all over the world. And it wouldn’t matter if he was — I have a daughter who’s gay.”

She said her daughter was extremely offended by the rumors, because she felt like everyone was basically saying that “everyone who’s gay commits suicide.”

She said her son, who was a student at LA’s Fashion Institute of Design and Merchandising, had tried to commit suicide before — and it happened in 2007 when she was on Dancing With the Stars. “He promised he would never do anything like that again and I believed him,” she told Oprah. “Whatever his reality was, I do believe that there are moments when you slip into insanity and you no longer think rationally. I believe that’s what happened.”

Her son had battled with a drug addiction in the past, and had entered rehab at the age of 17. Osmond says that he was not under the influence when he committed suicide, but that he was just lost.

“My son was clean when he jumped,” she said. “There were no drugs in his system, but I believe the ramifications were there.”