Something’s Gotta Give on tonight’s Grey’s Anatomy. New addition Peter MacNicol calls out Karev, dropout Cristina and jilted Callie try to make lemonade, Derek tries to get busy with Meredith and the Chief, Owen and Teddy try to save a top secret patient. 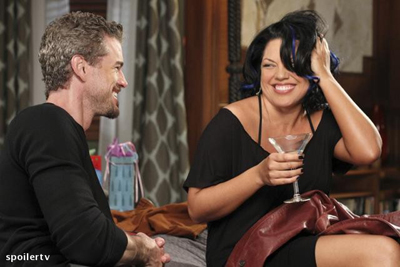 Karev (Justin Chambers) doesn’t make a great first impression when he misses his first day of rounds with Stark. Even worse, the new doc walks in on Karev grumbling at a young patient and calls him out on being hung over from his weekend getaway.

When dropout Cristina (Sandra Oh) and recently dumped Callie (Sara Ramirez) find themselves with too much time on their hands, Cristina throws her energy into decorating and planning a housewarming party, while Callie considers a “radical” new look.

Though Cristina doesn’t appear to be ready to get back in the game, Owen (Kevin McKidd) and Teddy (Kim Raver) tell Chief Webber (James Pickens, Jr.) to hold off on reporting her walk-out to the American Board of Surgery.

Then the trio of top docs gets to the business of saving a major political figure from the Middle East. The mysterious Amir was in a car accident while not officially in the US and now “the fate of the free world” is in Seattle Grace’s hands. A security detail wants to get the patient healthy enough to export him back to his country before news of his top secret visit surfaces, but that may not be an easy task.

Derek (Patrick Dempsey) tries to steal some time for a baby-making session with Meredith (Ellen Pompeo), but it doesn’t seem to be in the cards. He might be able to ditch Lexie (Chyler Leigh) and distract Meredith from worrying about Cristina, but playtime is over when someone in a secret service earpiece comes looking for Meredith.