Giada De Laurentiis has slammed rumors she is having an affair with John Mayer. 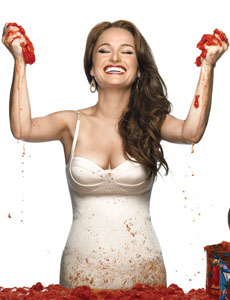 Giada De Laurentiis’ body is not John Mayer’s wonderland, and she is pretty ticked off about the rumors she is having an affair with the manwhore of Hollywood.

Reports surfaced this week that De Laurentiis was spotted sneaking into a hotel suite with Mayer in New York, but the very married food star says no way, no how.

“When the Star reporter approached Giada De Laurentiis on Sunday, while she was co-hosting a children’s cancer fundraiser, Giada responded unequivocally that she did not see John Mayer when she was in New York for the Food and Wine Festival.

Furthermore, contrary to the claims of an anonymous ‘source,’ at no time did Giada step foot in the Gansevoort Hotel. Giada indeed met John Mayer briefly at a charity event in 2007 but has not seen him since. To be clear, they are not friends and cannot even go so far as to call John Mayer an acquaintance.

There is not a sliver of truth to Star magazine’s story. It is unfortunate Star would publish these malicious untruths without reporting the fact that Giada was with her husband Todd that weekend in New York, along with their family and friends. Giada De Laurentiis and her family deserve an apology and we demand an immediate retraction.”

You know John Mayer is loving every minute of this.