Country music’s biggest stars made room for one more on the Country Music Awards stage and her name was Gwyneth Paltrow.

The live Country Music Awards debut of Gwyneth Paltrow on Wednesday night created so much buzz even the Oscar winner herself couldn’t keep anything in her stomach. “I was really bad last week; I lost my appetite and I couldn’t sleep,” the star admitted to Reuters earlier in the week. 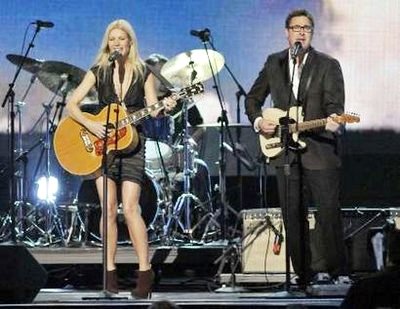 Paltrow took Nashville’s biggest stage to perform Country Strong from her new movie Country Strong due out next month in limited release and nationwide January 7. So, how did the mother of two and multi-talented actress fare at the Country Music Awards? Two words can describe Gwyn — impeccably triumphant!

Gwyneth Paltrow looked poised and polished at the 44th annual CMAs in a black mini-dress with a guitar strapped firmly to her frame. Her only other accessory during the performance of Country Strong was Grammy Award–winner Vince Gill, who accompanied the actress on vocals. We have but two questions — when did she learn to strum a guitar and when did she learn to sing like that?

It’s no secret Paltrow can use her pipes, but honestly this was a debut worthy of more than just one or two movie songs or TV guest spots. A few times, she even seemed to get lost in the song as she closed her eyes and felt the music. When Reese Witherspoon tackled June Carter she was good but you wouldn’t think of her as someone to make an album. Paltrow on the other hand, made a debut worthy of wanting to listen to more. There was something comforting about it.

With Gwyneth Paltrow’s CMA debut behind her and her Glee performance on deck, we can only hope to hear even more from her. Country Strong, due out next month, features Paltrow tackling the trials of a country singer’s rise back to the top after rehab. After her showing on the Country Music Awards, her performance in Country Strong can’t come fast enough.

Watch the video of Gwyneth performing at the CMS’s: