Carrie Underwood and Brad Paisley hosted Nashville’s biggest night as the Country Music Awards celebrated the biggest names in country music — and a few new ones. 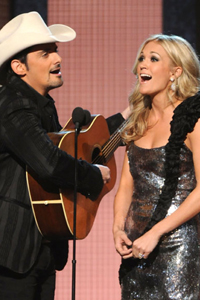 Co-host Carrie Underwood gave the Country Music Awards a tune-up with a firecracker performance while sharing the stage with a banjo-playing Keith Urban and guitar-wailing Brad Paisley. The trio readied the stage for a country party big enough to debut Oscar winner Gwyneth Paltrow and hand out career making trophies to the likes of the Zac Brown Band, Lady Antebellum and the night’s biggest winner, Miranda Lambert.

Speaking of Carrie Underwood and Brad Paisley, the two comedic co-hosts in crime wasted no time drumming up the laughs and taking shots at all their country music peers, including newbie Gwyneth Paltrow. “Gwyneth, there’s something I always wanted to ask you. Can you get me two Coldplay tickets?” Brad Paisley joked as Paltrow looked on. Let’s get right down to what SheKnows has been waiting for — the winners and the musical acts.

The night belonged to a certain newly engaged couple and as Brad Paisley said, “After the night Miranda Lambert and Blake Shelton are having we should see a baby in nine months.” Nashville has become Miranda Lambert’s playground lately and the spitfire is not only opening the door for herself, she’s busting down the walls after paying her dues. Lambert topped the nominees list coming into the CMAs and she became the evening’s most decorated artist, taking home, among others, Song of the Year, Female Vocalist of the Year and Album of the Year. Shelton nabbed himself two trophies including Male Vocalist of the Year, making them the king and queen of the night.

Lady Antebellum took the reigns from groups like Rascal Flatts and Brooks and Dunn to become the hottest young act in music. The five-time nominees of the night took home two of their five categories with top honors as Group of the Year and Single of the Year for Need You Now.

Other big winners of the night included the popular Zac Brown Band for New Artist of the Year and the cool cats of Sugarland for Duo of the Year with Entertainer of the Year going to Brad Paisley. 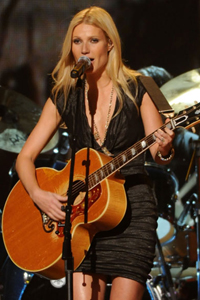 The Country Music Awards laid out a performance line-up with more stars than Carrie Underwood had costume changes — which was a lot.

She may have debuted Country Strong towards the evening’s close but it was fitting because Gwyneth Paltrow was perhaps the most talked about performer going into the Country Music Awards. Paltrow had nerves of steel standing beside veteran Vince Gill while singing like a seasoned pro. Her performance was absolutely amazing and if her acting in Country Strong is anything like her CMA debut, we’re in for a real treat.

Reba McEntire won her first CMA back in 1984 and time has been good to her. The redheaded, multi-talented superstar adapted Beyonce’s If I Were a Boy to fit her twang and rocked out the Reba version. Rascal Flatts has been dominating the country music circuit for years and after marriages and babies, the boys of country proved stronger than ever with a twangy-rich performance of their hit Why Wait.

The man who has won more CMAs than anyone took center stage to show the young folks he’s still got it. George Strait is as authentic as it gets when he performs in his trademark cowboy hat and genuine boots. The king of country took our breath away with The Breath You Take Away. Another great, Alan Jackson, joined winners of the New Artist of the Year award, the Zac Brown Band, for a little honky-tonking.

The performances by the legends of country music paved the way for Nashville’s youngest and brightest which included a visually stunning Taylor Swift on piano singing the haunting ballad Back to December from her latest album, Speak Now, and Sugarland belting out their number one ditty, Stuck Like Glue.

Never outdone and never shy, Blake Shelton stood amongst screaming fans in the center of the auditorium looking sexier than ever while singing All About Tonight. Shelton’s successful fiance and big winner, Miranda Lambert, electrified and pulled out the raspy voice we all love so much for her track That’s the Way the World Goes ‘Round.

In beautiful harmony, an American Idol joined country’s newest voice. Jason Aldean and Kelly Clarkson serenaded each other to Aldean’s smash hit Don’t You Wanna Stay. With numerous nominations for the evening and multiple wins to their name, Lady Antebellum captivated with the simply emotional Hello World.

Sheryl Crow and Miranda Lambert joined together in celebrating 50 years of the great Loretta Lynn.

Next page: Get the complete list of CMA winners