The Kennedy Center Mark Twain Prize for Humor saluted Tina Fey. Betty White, Steve Martin and Steve Carell were on hand to honor and tease the funnywoman. The star-studded evening will air on PBS November 14. 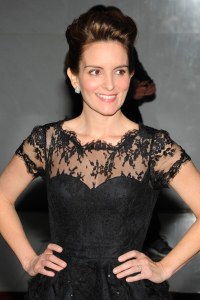 “It is crazy. It feels crazy,” Tina Fey gushed. “I am honored to be here. I am so honored to be in the company of Lily Tomlin and Whoopi Goldberg, the other women who hold this prize. All the people that have this prize are heroes to me.”

At only 40 years old, Tina Fey is also the youngest recipient. “She’s so young. I just hope I hang on long enough to see what she accomplishes when she learns to drive,” Betty White teased. “I’m the only one here who actually dated Mark Twain, and I can tell you they didn’t call him Samuel Longhorne Clemens for nothing.”

Joking aside, it’s no surprise Fey made the cut so young. Though some Americans may not have been aware of Fey before her Emmy-winning SNL performance portraying 2008 Republican Vice-Presidential candidate Sarah Palin, this funnywoman has been around.

Being honored by a room full of comedians, Fey’s big night included due praise, tempered with a healthy dose of ribbing.

Past Twain honoree Steve Martin kicked off the ceremony, saying, “We in the comedy community recognize genius when we see it, and Tina, you are.” Then he reminisced about Fey’s start on SNL. “Lorne said, ‘There’s a young new writer working downstairs. Let’s go down and have a three-way.'”

Fey’s Date Night costar Steve Carell told guests he and Fey used to date and when she denied that, he recounted, “We went to the Spaghetti Factory. I was extremely sorry when she had to leave early. I hope her cat is feeling better.”

Carell also gave a nod to Fey’s comedy genius, saying, “She has that uncanny ability to make something out of nothing.”

“We have great chemistry,” Fey’s former SNL Weekend Update co-anchor Jimmy Fallon said. “We’re like Sonny and Cher. We’re like Bono and The Edge. Reminds me of the song Bono once wrote for Tina: And I’d like to sing it to you.” Then Fallon performed his own twisted version of U2’s Beautiful Day.

Amid all the laughs, Jennifer Hudson made sure the night also included some Aretha Franklin style R-E-S-P-E-C-T — perfect song choice, Ms. Hudson!