The 2010 CMA Awards are tonight on ABC. Read on for our predictions and weigh in with your guesses!

The CMA Awards 2010 are finally here! Tune in to ABC tonight to see hosts Carrie Underwood and Brad Paisley, and their musical friends, celebrate the best in country music. 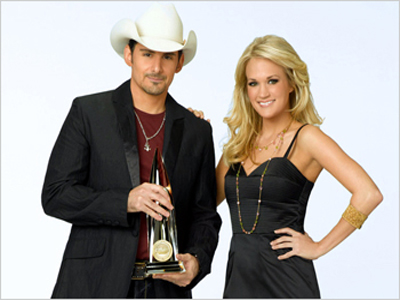 The list of nominees reads like a who’s who of in country music — Miranda Lambert is up for nine awards, Lady Antebellum for five, The Zac Brown Band and Blake Shelton each up for four and Dierks Bentley nominated for three.

We’ll have to wait until tonight to learn the winners (and see all the hot designer dresses,) but that won’t keep us from offering our winner predictions.

Entertainer of the Year

This is a tough one, but we’ll have to give it to Lady Antebellum for their crossover success on Need You Now. This easy-on-the-eyes trio understands what it takes to create successful music and it’s likely they’ll be awarded for that talent.

Female Vocalist of the Year

Taylor Swift, hands down. The curly-haired singer’s third album, Speak Now, went platinum in less than a week. If that’s not enough to win her the award, nothing is. Plus, we just want to see if she’s bringing Jake Gyllenhaal to the awards.

Male Vocalist of the Year

We’d like to lean toward perennial favorite George Strait, but this year’s award will likely go to Blake Shelton.

Musical Event of the Year

We’re going with the Blake Shelton/Trace Adkins collaboration for Hillbilly Bone. Both are hot on the country scene and this song received more airplay than the other nominees.

New Artist of the Year

Zac Brown Band. You couldn’t turn on country radio in 2010 without hearing Chicken Fried or another one of their songs. They’ll win it.

Vocal Group of the Year

Lady Antebellum. Do we even have to explain it?

Vocal Duo of the Year

This will likely go to Brooks & Dunn since the superstar twosome officially retired this year.

Single of the Year

Need You Now by Lady Antebellum. They’ll likely sweep all their categories.

Need You Now, of course.

Music Video of the Year

This will be a toss-up between Hillbilly Bone and Need You Now. We can’t choose, though of course we’re leaning toward Lady A.

Musician of the Year